Michael K didn’t take me to Las Vegas with him because a) I’m too big to hide in his suitcase and b) I was just there, and for reasons I don’t wish to disclose, I probably shouldn’t return for a while (maybe I got into a fight over some shrimp at a buffet and maybe I didn’t). But it’s not all bad, because MK left me with these pictures of Colin Farrell looking all kinds of good at the photo call for The Lobster at the Cannes Film Festival. I’m not sure what The Lobster is about, but I do know that my friend’s perpetually-horny Aunt Janet no doubt just wolf-whistled and make a joke about wanting to dip his ass in butter and suck his tail dry.

Colin Farrell is the type that I shouldn’t have the hots for, but my brain is hard-wired to get a major case of the horn-horns every time I see him. Normally I don’t go for reformed mansluts who look like they smells like Acqua Di Gio and freshly-waxed balls, but there’s something about a three-piece suit and 5 o’clock shadow that does it for me. He’s like “Yes, I’m dapper as shit, but I totally slept in my car last night” and I’m totally into it. 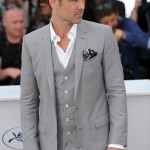