In “Who Is Leonardo DiCatchAHo Boning Today?” News….. About five minutes ago, Leonardo DiCaprio was supposedly holding a birthday candle between his hairy ass cheeks for his piece-of-the-moment RiRi to blow out. Well, if you believe Life & Style (which you TOTALLY should), he has pressed pause on doing RiRi to hit on the human form of a Katie Holmes yawn.

A source (Hi, Dakota Johnson’s publicist) tells Life & Style that at the after-party for Saturday Night Live’s 40th anniversary at The Plaza Hotel, Leonardo pretty much ignored RiRi and went after Dakota Johnson. I guess he just really had a craving for room-temperature tap water served in a soggy Dixie cup. The source went on to say that the Ghost of Jack Nicholson’s past wrapped his arm around Dakota and as she breathed in the aroma of rotten milk wafting off of his beard, he took her celebrity watching. The source dribbled out this stream of fanfiction that was probably written by E.J. James during her off time.

“He put his arm around Dakota and led her into the grand ballroom. He told her, ‘Let’s go look at all the celebrities.’ Dakota looked like she was trying to play it cool, but you could tell she was thrilled to have his attention. Out of everyone he socialized with, Leo seemed to be the happiest when he was with Dakota. As they walked away, Leo took the lead and guided her through the crowd, and a small smile spread across her face.”

But what happened next?! I need to know what happens next in Fifty Shades of Dick Cheese! The best line is “Let’s go look at all the celebrities.” I bet Leo grabbed her hand and led her to the petting area where they played with Andy Samberg’s ears and gently stroked Zach Galifianakis’ beard. After that, they bought some popcorn, sat on a bench and fed celebrities. It was fun and games until Miley Cyrus got overly excited and twerked on Dakota’s face. Who the hell says, “Let’s go look at all the celebrities“? I don’t think Leonardo DiCaprio would use that as a pick-up line. All he has to say is, “Hello, I am Leonardo DiCaprio, let’s make sex.”

If this is true, then it really is a sad day for the Victoria’s Secret Angels. First we learn that they’re flying away from Victoria’s cheap ass, because they’re not getting paid as many millions as they used to. And now we learn that the biggest Angels collector has probably moved on to pop stars and bland actresses. How the mighty Angels have fallen!

Here’s some thrilling pictures of Dakota getting coffee and walking through JFK yesterday. 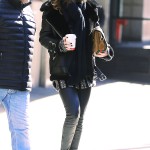 Tags: Dakota Johnson, Leonardo DiCaprio, Rihanna
SHARE
Our commenting rules: Don't be racist or bigoted, or get into long-ass fights, or go way off topic when not in an Open Post. Also, promoting adblockers, your website, or your forum is not allowed. And some comment threads will be pre-moderated, so it may take a second for your comment to show up if it's approved.
src="https://c.statcounter.com/922697/0/f674ac4a/1/"
alt="drupal analytics" >