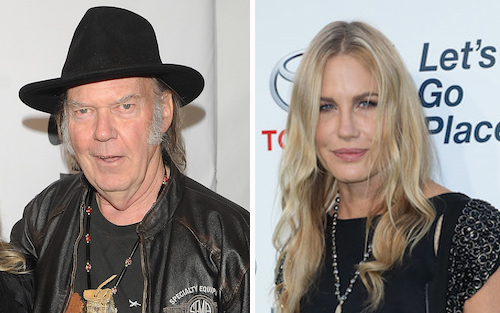 So how did this random match happen? Neil and Daryl collaborated on a documentary for Greenpeace about the Alberta Tar Sands, and an insider claims they’ve attended many protest rallies since. I’m sure you’re thinking “Aww, how cute! Two environmental activists in love!” but NO! Not cute! Daryl swooped in on Neil while he was still married to his wife of 36 years, Pegi Young, and they only filed for divorce a little over a month ago. Damn, first Madison the Mermaid starts busting her face, now she’s busting up marriages!Of course, some of Neil’s friends aren’t too happy that he left his wife for that dizzy bible-thumping bitch Annelle from Steel Magnolias. Neil’s former band mate David Crosby gave an interview to the Idaho Statesman where he pretty much calls Neil out for hooking up with a latex-faced homewrecker:

Who would have thought that a relationship burped up from the bowels of random would be so damn dramatic? Neil seems like the most easy-going pepaw in the world – those sideburns say “I like beer and I like naps”. But apparently he’s into some telenovela shit! Or whatever the Canadian version of a telenovela is. Road to Avonlea? Train 48?

Regardless, I’m personally very proud of myself that I managed to write this whole thing without making a Harvest Poon joke. Oh, goddamn it. So close!

Tags: Daryl Hannah, New Couple Alert, The Drama Of It All
SHARE
Our commenting rules: Don't be racist or bigoted, or get into long-ass fights, or go way off topic when not in an Open Post. Also, promoting adblockers is not allowed. And some comment threads will be pre-moderated, so it may take a second for your comment to show up if it's approved.
src="https://c.statcounter.com/922697/0/f674ac4a/1/"
alt="drupal analytics" >