Katie Price Is Somebody’s Mother For The Fifth Time 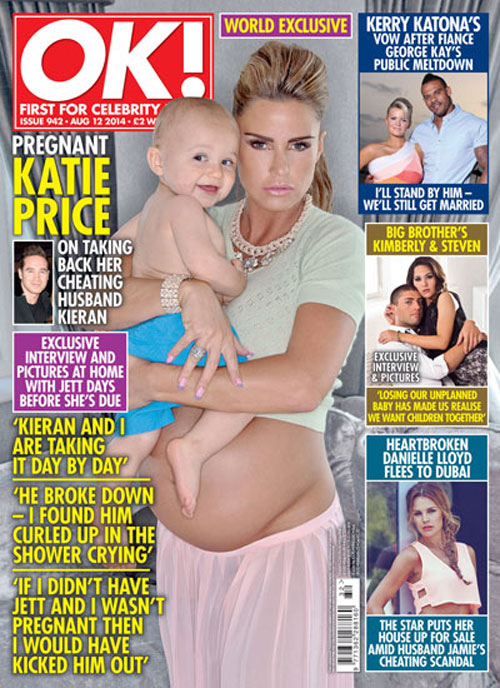 Katie Price’s fifth baby friend and her second daughter wasn’t supposed to check out of her Botoxed uterus (yes, she botoxed her uterus, because wrinkly wombs are gross) for another 11 days and the c-section was scheduled for August 15, but I guess that child just couldn’t wait to gaze at her mother’s exquisite “sculpted from a block of plastic” face, because she arrived early. Katie’s publicist announced through Twatter last night that she gave birth to the next bundle of adorableness that she’ll pimp out on the cover of OK! and in reality shows. Katie’s second daughter is her second kid with her cheating slut bag husband Kieran Hayler.

Katie’s spokeswhore’s tweet is under 25 words, but I still managed to scream, “JUST TELL US THE NAME,” at least 20 times while reading it. The names of Katie’s four kids are: Harvey Price, Junior Savva Andreas Andre, Princess Tiaammi Crystal Esther Andre and Jett Riviera Hayler. There’s a mixture of normal names and fucked-up names in there, and I have a feeling that she’s really going to bring the baby name fuckery with this kid. Metro says that Katie recently said that she wants to name her daughter “Electra” after Carmen Electra. Only a British orchid like Katie Price would name her kid after American orchid Carmen Electra. Personally, I hope she names her daughter Harveylina Electra Price (HEP!).

Katie let her third husband Keiran Hayler be in the delivery room with her, because she’s trying to make their marriage work. Katie was going to shove divorce papers between Keiran’s ass cheeks after she found out that he cheated on her with two of her friends. In this week’s OK! Magazine (via The Daily Mail), Katie says that Keiran is a sex addict and she’s helping him work through his addiction to puss. Katie knows that Keiran is a sex addict who will bone anything, because he cheated on her with old, ugly easy slut cows instead of with gorgeous, young, stunning, chaste flowers like her. The licensed psychologist put it like this:

“A lot of people would say he’s just a young guy who wants to sleep around, but I’ve learnt a lot through his therapy. I mean, if he’d gone for someone younger, fit body, big tits or pretty, you could at least see he cared who he was with. But two older women who are rank? But it’s because it was easy and just fed his addiction.”

Katie says she’s obsessed with knowing about the adventures of Keiran’s wandering peen and she has video of him fucking her friend in her barn on New Year’s Eve.

“I want to know every detail – when he had sex, how he had it… On New Year’s Eve I had a party here and him and Jane had sex in the barn. I’ve got it on camera because of the CCTV footage. [Kieran]’s broken down over this. And I was glad about that. I found him in the shower curled up in a little ball. He was crying his eyes out.”

Katie is so brave and so courageous for staying with Kieran. She’s an inspiration to us all. The sanctity of marriage is obviously really important to  Katie and she’s not staying with Kieran because she knows she can milk at least 5 more covers of OK! Magazine out of their shitty marriage before dumping him for husband #4. Katie and Keiran staying together is also good news for Harvey, Junior and Princess YTuMamaTambien, because they won’t have to learn ANOTHER stepfather’s first name anytime soon.

Tags: BABIES!!!, Harvey Price, Katie Price
SHARE
Our commenting rules: Don't be racist or bigoted, or get into long-ass fights, or go way off topic when not in an Open Post. Also, promoting adblockers is not allowed. And some comment threads will be pre-moderated, so it may take a second for your comment to show up if it's approved.
src="https://c.statcounter.com/922697/0/f674ac4a/1/"
alt="drupal analytics" >