I really deserve a double Alexis Carrington slap to both of my fucking face cheeks for even comparing that basic bitch Taylor Swift to the legendary SammyJo. Taylor Swift looks like a Dollar Tree broom going to a Halloween party as Sammy Jo Carrington. But really, when I saw Taylor Swift at the American Music Awards tonight, I got severe shades of Sammy Jo. The truth is, the comparison is not totally crazy, because Taylor Swift will probably end up marrying a gay dude and we all know that she’s kidnapped a white guy or two. But the biggest difference is that Taylor Swift could never bust out sweet, sweet, boner-inducing moves like these:

I know I post that clip way too often, but if I didn’t post it at least once every couple months, I’d probably wilt like a dick in front of Parasite Hilton’s pussy, because Sammy Jo dancing is life’s oxygen. And I know Taylor Swift is a boy trap who is the only 23-year-old on Earth who makes heart-shaped raspberry tarts in her Easy Bake Oven, but I have to give her credit for doing herself up like Sammy Jo. It’s best decision she’s ever made her in her life! 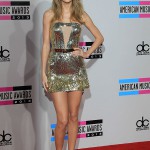 Tags: I Can't With Myself, Taylor Swift
SHARE
Our commenting rules: Don't be racist or bigoted, or get into long-ass fights, or go way off topic when not in an Open Post. Also, promoting adblockers is not allowed. And some comment threads will be pre-moderated, so it may take a second for your comment to show up if it's approved.
src="https://c.statcounter.com/922697/0/f674ac4a/1/"
alt="drupal analytics" >