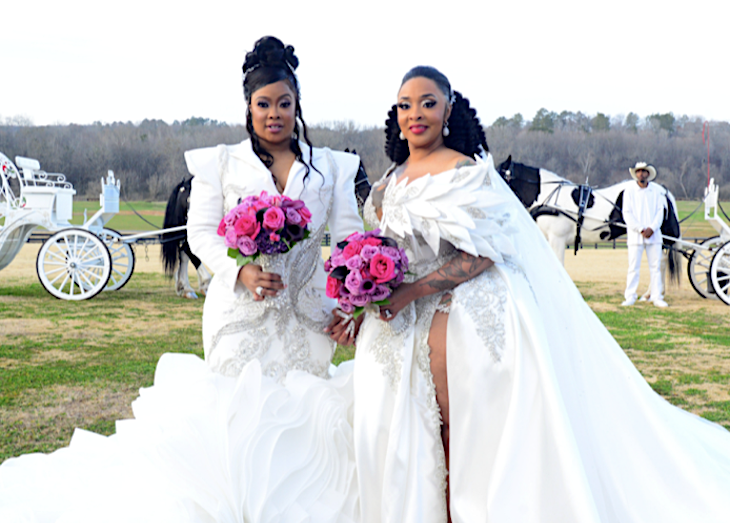 It’s Da Wedding of Da Season! Da Brat married her “twin flame,” Jesseca “Judy” Dupart on 2/22/22. The ceremony was held at the Horse Mansion in Fairburn Georgia, and attended by 100 guests, including past and present Real Housewives of Atlanta cast members Kandi Burruss, Porsha Williams, and Eva Marcille. The wedding was profiled in the latest issue of People, and will appear in the upcoming second season of the couple’s WE tv reality series, Brat Loves Judy. A reality show wedding attended by Real Housewives? I hope the wine glasses were plastic.

Jermaine Dupri acted as groomsman and walked 47-year-old Da Brat down the aisle, while 40-year-old Judy was escorted by her brother. Da Brat’s sister, LisaRaye McCoy, was a bridesmaid and Rickey Smiley danced with her for the honorary father-daughter dance. 47-year-old Da Brat tells People that getting married on 2/22/22 was no coincidence, via People:

“We’ve been calling each other twin flames for a while. So this date, 2/22/22, is a significant event. We just didn’t want to miss it because it comes once in a lifetime,” Dupart continues. “It’s relevant. It’s just real significant to our relationship. It signifies angel numbers, and it also is reminiscent of twin flames.”

Da Brat went public with Judy back in March 2020. This was also when she officially came out as gay. Da Brat tells People:

“I met somebody that made me want to be so out loud and tell everybody and scream it from the mountaintops. So, I’m very grateful for that. It was like a weight lifted. I promise you, she was sent to me by God.”

“She’s the person who completes me. She gives me courage. She inspires me, and she makes me fearless. She makes me not afraid,” Brat says.

“I think it’s important that people express how they really feel,” she adds. “So many people live for other people and they live by the judgment of other people. I think it’s very important to live for yourself. Whatever makes you happy, don’t suppress it. Don’t hide it. You only live once.”

Da Brat posted some of People’s photos to Instagram, and she wrote that she and her wife are “BOTH Mrs. Harris-Dupart” (Da Brat’s real name is Shawntae Harris):

Here’s Da Brat and Judy getting fitted for their dresses:

Now that the wedding is over, Da Brat and Judy are getting ready for the birth of their first baby together. Judy already has three older children from previous relationships, but this will be Da Brat’s first kid. The rapper told People she never thought being a mom was “in the cards” for her, adding:

Tags: Da Brat, Weddings
SHARE
Our commenting rules: Don't be racist or bigoted, or post comments like "Who cares?", or have multiple accounts, or repost a comment that was deleted by a mod, or post NSFW pics/videos/GIFs, or go off topic when not in an Open Post, or post paparazzi/event/red carpet pics from photo agencies due to copyright infringement issues. Also, promoting adblockers, your website, or your forum is not allowed. Breaking a rule may result in your Disqus account getting permanently or temporarily banned. New commenters must go through a period of pre-moderation. And some posts may be pre-moderated so it could take a minute for your comment to appear if it's approved. If you have a question or an issue with comments, email: [email protected]listed.com
src="https://c.statcounter.com/922697/0/f674ac4a/1/"
alt="drupal analytics" >