We Might Never See Sarah Palin’s Appearance On “Who Is America?” 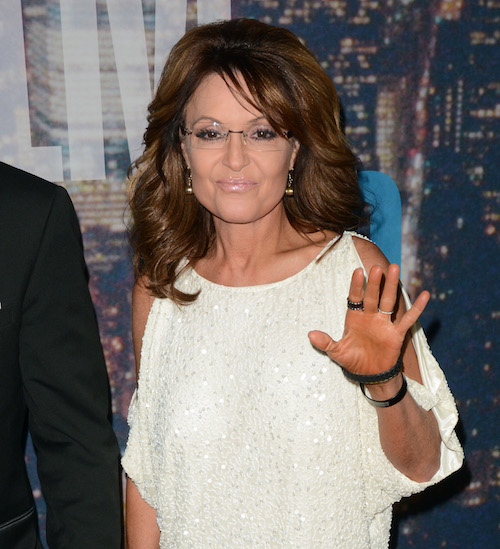 Sacha Baron Cohen’s new Showtime series Who Is America? is a great show if you enjoy cringing over clueless bigots enthusiastically making an ass of themselves (sometimes literally). One of the biggest draws was the promise of an appearance by Sarah Palin. Sadly, we might not get to watch such entertaining programming.

Last month Sarah said on Facebook that Sacha Baron Cohen had tricked her into appearing in a segment for Who Is America?, and she was super pissed about it. She claimed she was asked to fly to D.C. to talk about the troops with a handicapped veteran for a “legit Showtime historical documentary.” When she arrived, she found Sacha in a fake wheelchair. Deadline says that Showtime president of programming Gary Levine addressed the situation at the Television Critics Association yesterday in Los Angeles, and he implied that someone might be actively trying to make sure the segment doesn’t air.

“All I can say about that is that there are several people who have thrown themselves in front of buses that may not be heading their way.”

That’s not to say Sarah Palin is lording over Showtime like a pageant-haired Godzilla in a bugle-beaded blazer. Gary says that Sacha has “a very high” standard for his show, and that he is “always refining” the end result. Sacha also reportedly screens every episode for a test audience, and will make changes before they go to air.

Additionally, Showtime has since released a statement shooting down Sarah’s accusations of valor-stealing by saying that Sacha “never presented himself as a veteran of the U.S. military” to Sarah, and “contrary to her claims” he never appeared in a wheelchair.

I’m starting to think Sarah has some kind of vision problem in which she sees what she wants to see, like a handicapped veteran in a wheelchair, possibly with a talking can of Mountain Dew screaming U-S-A as a bald eagle flies overhead. Sarah was probably very confused by Gary’s statement about people throwing themselves in front of buses. “Geez, a bunch of idiots jumpin’ in front of dangerous vehicles? Who the heck held the Palin family reunion without me!”

Tags: Sacha Baron Cohen, Sarah Palin, Who Is America, You Pissed Somebody Off
SHARE
Our commenting rules: Don't be racist or bigoted, or get into long-ass fights, or go way off topic when not in an Open Post. Also, promoting adblockers, your website, or your forum is not allowed. And some comment threads will be pre-moderated, so it may take a second for your comment to show up if it's approved.
src="https://c.statcounter.com/922697/0/f674ac4a/1/"
alt="drupal analytics" >