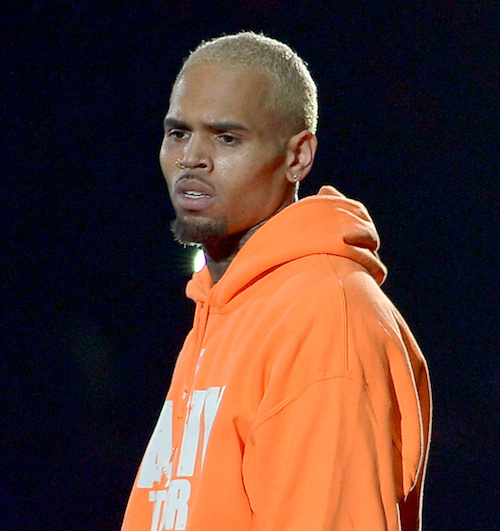 It would be nice to send a message to the universe saying we don’t need any more evidence that Chris Brown is a demon visiting from Hell. We all know, and yet here we are with yet another story featuring Chris Brown that will almost certainly make your stomach bile rise.

TMZ says that Chris Brown has recently been sued by a woman known only as Jane Doe. Jane is being represented by Gloria Allred. Jane Doe is suing Chris because she claims she was raped repeatedly in his house in February 2017. That’s also the same month in which Karrueche Tran got a restraining order against Chris Brown after he allegedly threatened to kill her.

Jane claims she was invited to an after-party at a recording studio, which then moved to Chris Brown’s house. She says Chris supplied everyone with weed, coke, and molly (drugs? You don’t say). Jane and a few other women were pulled into a bedroom by a female friend of Chris’, who then blocked the door with a couch. The friend then allegedly forced the women to hook up with Chris and his other friend Lowell Grissom.

Jane claims she tried to leave, but the friend grabbed her by the throat and forced her to go down on Lowell. When Jane got up, she claims she was pushed down on a bed and forced to perform oral sex on Chris’ lady friend, who was apparently on her period at the time. After Jane took a shower, she claims Lowell pushed her on a bed and raped her. Jane also alleges she was raped a second time by Lowell against a washing machine.

According to the lawsuit, Jane Doe went to a rape treatment center and reported the whole incident to the police. LAPD sources tell TMZ that police investigated the incident, but they couldn’t determine if the sex was consensual or not.

Jane claims her phone was taken from her at the recording studio, and the only reason she followed everyone back to Chris Brown’s house was because she thought that’s where she’d get her phone back.

Gloria Allred held a press conference yesterday regarding the lawsuit. According to Gloria, the police actually paid a visit to Chris Brown’s house the evening of the party, and that he was quick to hide a duffel bag which allegedly contained guns. Jane Doe claims there were guns throughout the house.

Chris Brown’s lawyer Mark Geragos tells TMZ that Jane Doe’s lawsuit is just a shameless $17 million money grab. Mark says the police already investigated the case, and they determined no sexual assault happened, and that he and Gloria secretly mediated the case and he believes the claims are false. He also calls Chris “a target.” Gloria doesn’t deny a mediation happened, but she says Mark and Chris were no-shows. According to Gloria, her client was interviewed for several hours by a judge who found Jane Doe “credible.” Gloria also calls BS on Mark’s claim that she demanded a $17 million payout.

In a sane and just world, a visit to Chris Brown’s house should end with a headache from listening to his sketched-out rants for Instagram and nothing else. My brain is wrecked from Jane Doe’s story, so I’m going to take a temporary mental trip back in time to when the most illegal thing in Chris Brown’s house was a monkey.

Tags: Awful, Chris Brown, Lawsuit
SHARE
Our commenting rules: Don't be racist or bigoted, or get into long-ass fights, or go way off topic when not in an Open Post. Also, promoting adblockers is not allowed. And some comment threads will be pre-moderated, so it may take a second for your comment to show up if it's approved.
src="https://c.statcounter.com/922697/0/f674ac4a/1/"
alt="drupal analytics" >