Don’t worry – there’s a whole mess of Chris Pratt working that buff DILF realness later on. But for now, let us once again enjoy the memory of formerly-fat Chris Pratt’s delicious Orange Crème Marshmallow Peep body stuffed into a junk-hugging stars-and-stripes Speedo. Fun fact about that junk: according to Chris Pratt, it was pretty much in sleep-mode the whole time.

During an interview with Men’s Health UK (via People), America’s Current Sweetheart admitted that after going back and forth between fat and jacked several times, he realized that jacked might be better for his health. And also his boner worked better when it wasn’t being suffocated by his adorable FUPA.

“I’d gone back and forth, lost weight for Moneyball, got fat again, then trimmed down for Zero Dark Thirty, then gained it all back again for Andy [Parks & Recreation]. That’s when I saw Zero Dark Thirty and right after walking out I was like: ‘I’m going to get in shape and I’m never going to be fat again.’ I was impotent, fatigued, emotionally depressed. I had real health issues that were affecting me in a major way. It’s bad for your heart, your skin, your system, your spirit.”

That is SUCH a Catch-22 situation for someone who gets the horn-horns for a pillow body. On the one hand, you get a soft, snuggly Chris Pratt, but his dick is as active as a lump of raw Pillsbury crescent dough. On the other hand, you get a working weiner, but it’s attached to a dude who feels like a trash bag filled with hammers. I guess I’d have to pick fat Chris, but only because I need someone who won’t get mad when I rip into a bag of ketchup chips while watching TV in bed.

And as promised, here’s a ripped Chris Pratt looking all kinds of top heavy in Men’s Health. 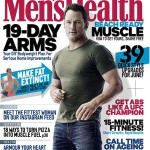 Tags: Chris Pratt, Hotness
SHARE
Our commenting rules: Don't be racist or bigoted, or post comments like "Who cares?", or have multiple accounts, or repost a comment that was deleted by a mod, or post NSFW pics/videos/GIFs, or go off topic when not in an Open Post, or post paparazzi/event/red carpet pics from photo agencies due to copyright infringement issues. Also, promoting adblockers, your website, or your forum is not allowed. Breaking a rule may result in your Disqus account getting permanently or temporarily banned. New commenters must go through a period of pre-moderation. And some posts may be pre-moderated so it could take a minute for your comment to appear if it's approved. If you have a question or an issue with comments, email: [email protected]
src="https://c.statcounter.com/922697/0/f674ac4a/1/"
alt="drupal analytics" >