The All-Female Ghostbusters Has A Cast 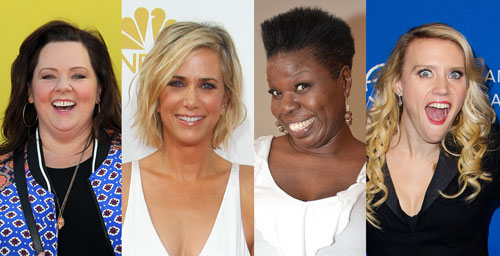 Shiiiiiiiiit! Well, so much for my dream cast of Charo, Taraji P. Henson as Cookie Lyon, Phoebe Price and Detective La Toya Jackson.

During the past few months, we were told that the Ghostbusters reboot was going to star Jennifer Lawrence, then Emma Stone, then Rebel Wilson, then Lizzy Caplan, then Amy Schumer and then the girl at your local Starbucks who always write a heart over the i in your name. After months of rumors, director Paul Feig, who created Freaks & Geeks and did Bridesmaids, finally tweeted pictures of the actual cast today. The Hollywood Reporter confirms that Melissa McCarthy, Kristen Wiig, Leslie Jones and Kate McKinnon are very close to officially signing on to be the new Ghostbusters. You know Melissa McCarthy and Kristen Wiig, and you also know Leslie Jones and Kate McKinnon if you’re watching the current season of Saturday Night Live since they’re both on that shit.

THR says that this Ghostbusters is a reboot and not a continuation of the original. They’re not going to be the daughters of the first Ghostbusters or anything. In an e-mail from the Sony hack, Paul Feig told Sony’s Amy Pascal that he wants Peter Dinklage to play the villain. HitFlix also posted what may be a plot detail:

Erin Gabler and Abby Bergman are the first two leads, and as the film begins, they are former colleagues. They co-wrote a book about the paranormal together, then went in different directions. Erin works for Columbia, and she’s getting close to tenure, while Abby is more involved in the pursuit of ghosts, with a new partner named Jillian. In a world where there are thirty different “Ghost Hunters” style TV shows out there, the set-up makes sense, and it sets up a tension between serious academic motives and mainstream pop parapsychology.

If I was guessing, I’d bet Wiig is Erin, Jones is Abby, and McKinnon is Jillian. That’s because I’m almost positive Patty, an MTA subway ticket employee who stumbles across the main ghost in the film, is going to be McCarthy. Seems like a perfect fit for her, and I can see how all four of them will fit together as a team.

I cannot produce any feelings about a Ghostbusters reboot until I know two things:

1. Does Sigourney Weaver reprise her role as Dana/Zuul in it?

2. If Sigourney Weaver is in it, which one of those four ladies is she going to try to scissor with?

Tags: Kate McKinnon, Kristen Wiig, Leslie Jones, Melissa McCarthy
SHARE
Our commenting rules: Don't be racist or bigoted, or post comments like "Who cares?", or have multiple accounts, or repost a comment that was deleted by a mod, or post NSFW pics/videos/GIFs, or go off topic when not in an Open Post, or post paparazzi/event/red carpet pics from photo agencies due to copyright infringement issues. Also, promoting adblockers, your website, or your forum is not allowed. Breaking a rule may result in your Disqus account getting permanently or temporarily banned. New commenters must go through a period of pre-moderation. And some posts may be pre-moderated so it could take a minute for your comment to appear if it's approved. If you have a question or an issue with comments, email: [email protected]
src="https://c.statcounter.com/922697/0/f674ac4a/1/"
alt="drupal analytics" >