Miley Cyrus Will Turn Off The Sexy When She Turns 40

Seen above scaring and scarring children, Miley Cyrus hasn’t been seen nearly enough on the ho stroll, so she shoved herself into another pair of cooch-killing denim Pampers to perform and talk to Matt Lauer on Today this morning. Before performing with twerking little people and the saddest human rainbow ever, Miley talked to Matt about how she’s been bringing the ho shit in heavy doses for the past few months. Miley joked that she’ll stop being sexual when she’s 40, because that’s usually when a human’s fuck parts die and fall off their body.

Matt: Is it a phase? Is this a phase? Is the sexual side of you, that we’re seeing a lot of, something that’s going to be here for a while and then you’ll be on to something else?

Miley: Well I heard that when you turn 40, things start to go a little less sexual. So probably around 40, around that time, I heard that’s when people don’t have sex anymore, so I guess maybe around then.

Matt: Do you know how old I am?

Two things: I’m not 40, but my fuck parts die a little more every time I see another close-up picture of Miley’s chicken schnitzel ass. And my feelings about Miley joking about how people stop fucking at 40 are best expressed through this GIF of one of the most important seasoned sluts in history.

Miley joking that Matt Lauer isn’t sexual is some funny shit, because he was the biggest slut whore on that stage. Three seconds before that interview, he boned a side piece in the janitor’s closet and three seconds after that interview, he boned a different side piece in the same janitor’s closet. When Miley told Matt that he’s definitely not sexual, he let out a laugh. Matt didn’t giggle because he thought her joke was funny, he giggled because the vibrating Fleshlight that’s always wrapped around his peen hit the right spot. 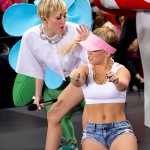 Tags: Matt Lauer, Yeah Okay
SHARE
Our commenting rules: Don't be racist or bigoted, or post comments like "Who cares?", or have multiple accounts, or repost a comment that was deleted by a mod, or post NSFW pics/videos/GIFs, or go off topic when not in an Open Post, or post paparazzi/event/red carpet pics from photo agencies due to copyright infringement issues. Also, promoting adblockers, your website, or your forum is not allowed. Breaking a rule may result in your Disqus account getting permanently or temporarily banned. New commenters must go through a period of pre-moderation. And some posts may be pre-moderated so it could take a minute for your comment to appear if it's approved. If you have a question or an issue with comments, email: [email protected]
src="https://c.statcounter.com/922697/0/f674ac4a/1/"
alt="drupal analytics" >