Pimpin At The Pumpkin Patch 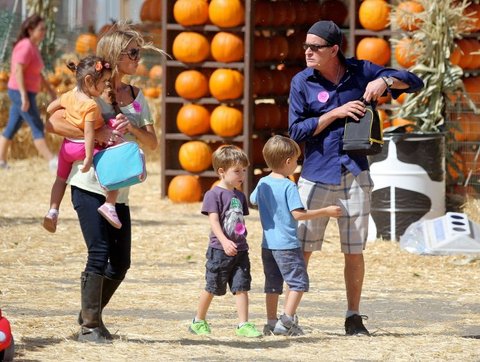 The pumpkin patch kick-off isn’t official until the goddess of Dlisted Phoebe Price shows up, but until then we can make due with these pics of Charlie Sheen and his ex Denise Richards serving up some fall goodness.  TMZ has an exclusive on their outing, which included the two sons of Brooke Mueller that Denise somehow has custody of until Brooke gets her shit together and Denise’s adopted daughter Eloise.

On the one hand, the idea of it is sweet, but looking through the pics I see lots of “fml” faces from Denise and a couple of boys who can’t decide whether to run to or run from their daddy.  I kid, this is probably the most wholesome thing they’ve done with Charlie since making ho-made crack brownies for the ho-meless (aka The Goddesses).

I can’t believe that Denise turned out to be the mom of the century in all this mess, and I hate life for making me respect her.  But there she is, with 3 kids that aren’t biologically hers, and they all look happy and healthy.  If she’s Catholic, surely she is up for some sort of sainthood in the future.  Charlie looks like a Benjamin Buttons frat boy so basically all is normal in the world.

You can go over to TMZ to see all the pics if you’re that bored on a Sunday morning.

Tags: Charlie Sheen, CPS Is On Line One, Denise Richards, Ho Stroll
SHARE
Our commenting rules: Don't be racist or bigoted, or get into long-ass fights, or go way off topic when not in an Open Post. Also, promoting adblockers is not allowed. And some comment threads will be pre-moderated, so it may take a second for your comment to show up if it's approved.
src="https://c.statcounter.com/922697/0/f674ac4a/1/"
alt="drupal analytics" >