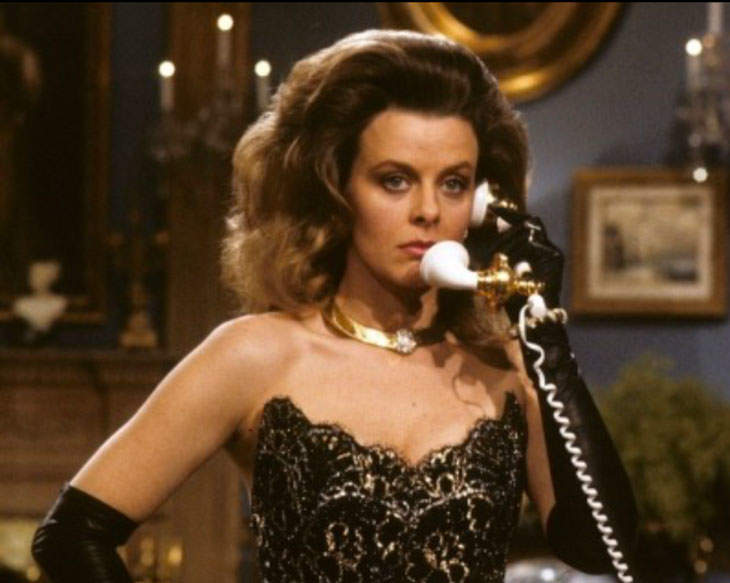 When soap operas ruled daytime (aka the true golden era of television), I was strictly an ABC soap operas bitch, and specifically, a One Life to Live bitch. Loving ran from 1983 to 1995 and aired before All My Children, which aired before One Life to Live, so I didn’t watch much of it. But today is the birthday of forever friend to Dlisted, Lahoma (who actually created Hot Slut of the Day back in 2005), and he asked me to make Gwyneth Alden HSOTD. And yes, that’s Gwyneth Alden above (on an extremely elegant princess phone) looking like Rachel Bloom after getting a Glamour Shots makeover in the 1980s. In other words, glamour personified.

Gwyneth Alden was mostly played by Christine L. Tudor, but Elizabeth Savage, Marianne Tatum, and Leslie Denniston all played her at one point. She was the matriarch of the Alden family and was married on and off to Clay Alden. Some of her notable antics of messiness included home-wrecking several of her daughter Trisha’s relationships, running a guy off the road, and trying to steal a valuable cosmetics formula. Only Barbie has had more careers than Gwyneth Alden because Gwyneth Alden was a waitress, a cosmetics mogul, an advertising executive, and a police psychologist.

In 1995, ABC decided to drop Loving and replace it with the spin-off series The City starring Morgan Fairchild. Loving had 24 actors on contract at the time, and ABC didn’t want to move them all to The City, so writers came up with a way to kill off most of them. So The Loving Murders happened, and by the end, many, many characters were killed off.
The first victim of The Loving Murders was Stacey Forbes who was poisoned with body powder, and the other victims included Clay Alden and Gwyneth’s son Curtis. Most of the Alden family was killed, and in the end, the serial killer ended up being Gwyneth Alden in a wig. Gwyneth had split personalities and one of her personalities was her daughter Trisha.  Once the truth was revealed, Gwyneth convinced her friend Stephanie to inject her with poison before the police could catch her and that was the end of Gwyneth Alden.

And a crime bigger than Gwyneth Alden’s killing spree and that wig is that Christine L. Tudor never ever was nominated for a Daytime Emmy!!!