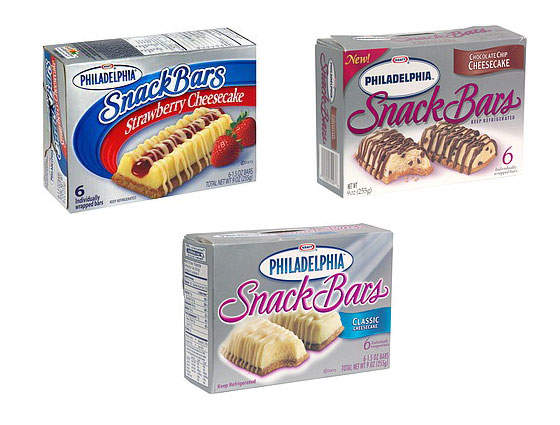 A tear of nostalgia may be trickling down your cream cheese-stained cheek if you regularly find yourself opening your eatin’ hole wide to shove in a block of Philadelphia cream cheese sandwiched between two graham crackers and layers of Smuckers strawberry jelly. Sometime around the early-aughts, Philadelphia decided that since many use their cream cheese to make cheesecake (although, only rich bitches did that since everybody else used generic brand cream cheese), they may as well hit the cheesecake stroll themselves. So they put out a line of cheesecake “snack bars,” and just thinking about Philadelphia Snack Bars puts another layer of chunk on my skinny fat gut.

Philadelphia didn’t mess around with their Snack Bars line. They released several flavors like plain, strawberry, chocolate chip, and marble brownie. They were like something a Golden Girl would poop out. Yes, they were that decadent and rich! Below is a Philadelphia Snack Bars commercial from 2000, and you’d probably guess it was from 2000 by that spiral curl ass perm. The commercial supposedly takes place in heaven, but for that dog, it’s HELL since that demonic angel is teasing him with a Snack Bar, a Snack Bar that would probably cause that pooch’s dog anus to explode, but still.

I’m not exactly sure when Philadelphia stopped making Snack Bars, but there’s still people out there who are begging for its return, and have also tried to make it themselves at home. Those people must really miss the feeling of their stomach skin stretching as they get as bloated as a Rush Limbaugh hot air balloon, because although they were called Philadelphia Snack Bars, it should’ve been called Philadelphia Snack Box, because it was impossible to not deep throat the entire box of six.