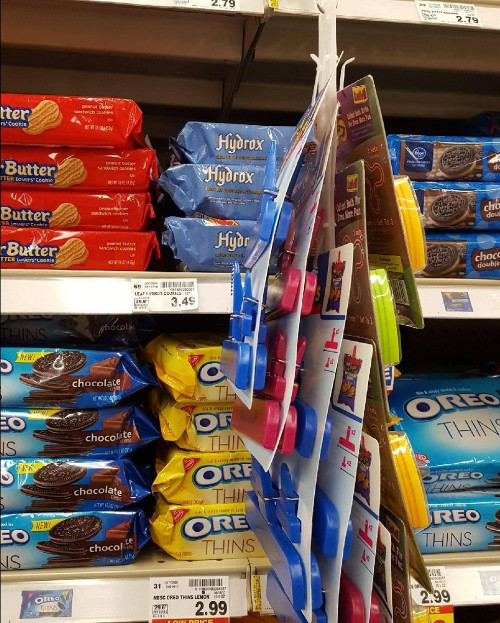 When you were a kid, did you ever ask your mom to bring back some delicious Hydrox cookies from the store and she showed up with some busted ass, knock off Oreos instead? No? Me neither, but it has happened the other way around. However, according to Food & Wine, Hydrox thinks Oreo is to blame for their diminished status in the cream-like centered, chocolate-ish cookie sandwich market, and not the fact that they look and taste generic as fuck and people looking for a prestige cookie experience, will always look elsewhere. Just the same, Hydrox is declaring war against its “rival” Oreo, and claims the company has been using underhanded tactics to push their brand off the shelves.

In a post on Facebook (Hydrox hasn’t gotten its shit together enough to get verified on Twitter), Hydrox called out Oreo and their parent company, Mondelez, in a 400-word post. In it, they claim that Mondelez has been unfairly hiding the Hydroxes when they come through and stock the Oreos. You see, Big Cookie Mondelez has a truck and a guy with a box-cutter on salary whereas Hydrox has to rely on store clerks to replace their cookies when they run out. Which is probably twice a year. Max. A big supermarket chain had to be the ones to break it to them.

We had no idea a competitor hiding our cookies was going to be a problem until a buyer for one of the largest store chains in the US sat us down and said, ‘We’re going to bring Hydrox into our stores, but you’re going to have a major issue to deal with,’” Hydrox anecdotally recounts.

’Mondelez is going to hide your cookies all over our stores to make sure you don’t get any sales, in hopes of being discontinued…. You’re going to have to hire people to go into each of our stores and make sure Hydrox is not being hidden.’ At that point, our jaw dropped.”

Given that both Hydrox (est. 1908) and Oreo (est. 1912) cookies have been around for ONE HUNDRED YEARS, you’d think they would have settled this by now. But Hydrox has always been behind, and had to totally rebrand in 2015. Here’s their new Instagram account (again, unverified).

Everyone, meet Hank the Hydrox Maggot. We here at Leaf Brands Lab have been testing numerous mascot concepts and we think we've finally nailed it. Designed by @darrenvogtart this little grub's a lot to love. #hydroxcookies #hydrox #food #maggot #cartoon #leafbrands

Hydrox is owned by Leaf Brands, the makers of Sour Farts Candy, and they’re marketing game is so weak, they’ve let somebody run amok with their Instagram and think people are actually going to read a 400-word facebook post about their non-Oreo Oreos. They may be the “original” but I don’t think Oreos is exactly quaking in their boots. Or maybe they are and they have a mole who’s pulling shit like this.

While the OTHER sandwich cookie uses pork lard to make their "creme" filling, here at Leaf Brands, we're only hitting you with that animal-fat-free kosher realness. #nabiscwho #leafbrands #hydrox

Poor Hydrox. I always just assumed you were the generic store brand. I’m sorry you’ve come so low. Hire somebody under the age of 60!

Tags: Cookie Wars, Hydrox, Oreo
SHARE
Our commenting rules are pretty simple: Don't be racist or bigoted, or go way off topic when not in an Open Post. If you see an offensive or spammy comment you think should be deleted, flag it for the mods and they'll be forever grateful and give you their first born (although, you probably don't want that).
src="https://c.statcounter.com/922697/0/f674ac4a/1/"
alt="drupal analytics" >