I don’t know what was a bigger mess: the Golden Globes itself or Channing Tatum’s hair. The Golden Globes by a landslide, I know, but Channing Tatum still served a whole lot of gel-covered messiness on top of his head. If Kate Gosselin’s possum hair drowned in a river and washed up to shore where it dried in the sun before dying, its corpse would look a lot like the hair that Channing Tatum wore at the Golden Globes last night. That shit is a deflated and traumatized Flock of Seagulls that needs to be rescued by the National Guard.

Crispin Glover is about to file a lawsuit against Channing Tatum, because that bitch stole his hair. I don’t know if Channing Tatum’s hair is for a role (UPDATE: It’s for a role), but if it is, I’m guessing the role is of a faux Emo high school junior circa 2003. Because that hair says, “Fall Out Boy is my favorite band.”

And yes, I still would, because he looks like a beefier version of Stefon and that IS the panty creaming look. 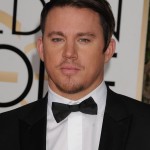 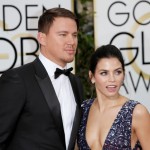