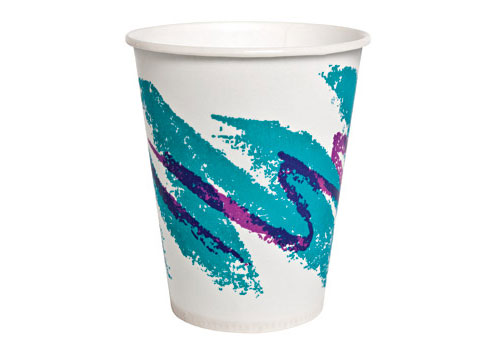 Up until a couple of weeks ago, I had no idea that there was a name for this cup. This cup, which is definitely the most important and influential work of art of the 20th century and beyond, is called the Solo Jazz Cup!  It has a name, Helen!

It was a pivotal part of the 90s for me. My mom worked in a hospital and she was on-call all the time, so if they called her in on the weekends or nights, she’d drag us with her. The cafeteria had towers and towers of StyroFoam Solo Jazz cups and after I drank hot chocolate out of one, I’d take it apart and make bracelets out of it. If someone ever asks you what the definition of “gay” is, just paint for them the image of a tween-age me singing along to Vanessa Williams’ “Save The Best For Last” on my DiscMan while dancing through the hospital halls with Solo Jazz Cup bracelets around my wrist.

We know this cup as the Solo Jazz Cup, but future generations will know it as the star attraction at MoMa.