Usually I’m not one for a winking and arrrrgh-ing pussy, but Sir Stuffington has won me over and I’d gladly swab the poop deck and walk the plank for him! Buzzfeed says that Sir Stuffington’s earlier days started out rough. He was born on the streets, and when he was just a newborn kitten, a bitchy raccoon scratched his eye out and broke his jaw during a street fight. So Sir Stuffington was in a bad way when a friend of his current foster mother found him down and out on the streets. Sir Stuffington’s foster mother, Blazer Schaffer, immediately took him and his orphaned brothers to the Multnomah County Animal Shelter where the vets there fixed him up as best as they could.

Sir Stuffy’s got a missing eyeball, a broken jaw, a heart murmur, anemia brought on by fleas attacking his ass and he and his two brothers’ got calcivirus, a contagious condition that’ll clear up with antibiotics. Blazer is currently taking care of Sir Stuffy and his brothers and every day they’re all getting stronger. 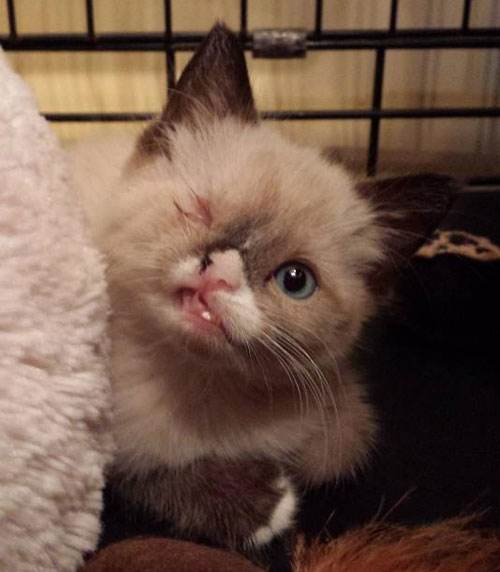 Soon, the day will come when Sir Stuffington is strong enough to track down his arch rival, the evil raccoon known as Captain Blackeyes, and get revenge on that trick for scratching his eyeball out. Never underestimate a tough little kitteh who’s always arrrrgh-ing.

And Sir Stuffington is now my second favorite pirate next to Geena Davis in Cutthroat Island.