Open Post: Hosted By A Hot Dog Sexing A Hamburger 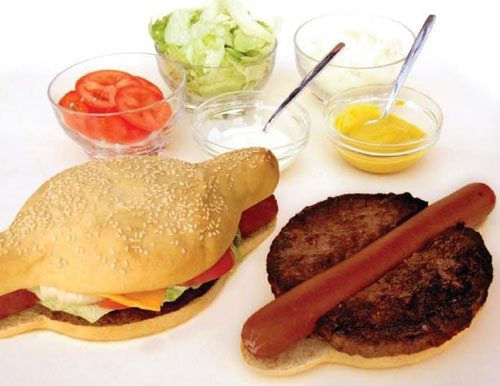 The Mercury says that the godfather of the Hamdog is Mark Murray from Perth and he got a US patent for his creation in 2009. Mark took the Hamdog to the Australian Shark Tank last year, but the sharks didn’t recognize a phallic culinary masterpiece when they saw one. Mark didn’t get one offer. But those sharks are going to smother their words all over a Hamdog and eat them up, because Mark is selling it for $8 (around 6 USD) at fairs all over Australia. Mark’s also selling franchise rights for $10,000 and he’s hoping to make vegan, gluten-free and vegetarian versions of the Hamdog soon. Here’s a little video of Mark’s team making Hamdogs. THIS is Brit Brit Spears’ porn: