Katie Holmes sometimes gets shit (and yes, I’m guilty of that) for the crap she puts on her body, but she shut all us haters up by stepping out in NYC the other day in a multi-purpose look that’s perfection from head to toe.

That hair is very “ballerina in a rush.” The shirt is lazy western wear. Those leggings probably once belonged to a wrestler from the 80s. That backpack is the kind of backpack that a late-80s kid would wear to school and wear it like it’s the shit. Those heels are probably the same heels that a member of Klymaxx wore while filming the video for Meeting In The Ladies Room. That hot outfit can take Katie Holmes all sorts of places. If she needs to perform in a ballerina recital, she’s ready. If she needs to host a rodeo, she’s ready. If she has to time travel back to the 80s and wrestle Koko B. Ware, she’s ready. If she wants to work the stroll during the daytime real quick, she’s ready. In that outfit, Katie Holmes can do anything. As Ronda Rousey would say, that definitely is not a “Do Nothing Bitch” outfit. That is a “Do Everything Bitch” outfit.

Here’s more of Katie’s hot outfit as well as equally-as-riveting pictures of her in a not-as-hot outfit. 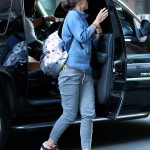