Billy Goat Brad showed up at LAX last night with St. Angie Jolie and their child army, and on his body was that beach hobo suit that he wears every single day and a t-shirt with a picture of Brangie on it. The Daily Mail, who has the greatest investigative research department in the world of journalism, says that one of the chosen ones, Vivienne Jolie-Pitt, drew it. Vivienne Jolie-Pitt should definitely not quit her day job of being the second coming of Jesus, because homegod needs to work on her artistic skills. Maybe that’s an abstract drawing of her parents, but if it isn’t, then she needed to change and add a few things to make it true to life. She needed to make St. Angie’s arms about an inch skinnier, add a bulging forehead vein and she needed to draw a cloud of dirt and flies around Brad Pitt’s armpits. But that t-shirt masterpiece will still win the grand trophy at the Whitney Biennial (“But they don’t give out trophies at the Whitney Biennial” – you “EXACTLY!” – me). That Whitney Biennial trophy will look nice next to the Oscar Vivienne will win for her work in Maleficent.

And if you can’t see that drawing too well, you can get a better look at it when it replaces A Sunday Afternoon on the Island of La Grande Jatte at the Art Institute of Chicago in the fall. 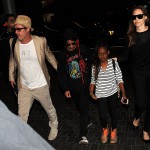