Kylie Jenner and her on-and-off-again piece/father of her two kids, Travis Scott, are off again, so he’s probably covered in tons of pussy today (“And that’s different from when he was with her how…?” asked you, making a point). So at the Schiaparelli Lukewarm Mess Haute Couture Spring/Summer 2023 in Paris today, Kylie showed that two tricks can play at the game by partly covering herself with a giant pussy. The other stuffed animals at the Disney store are definitely pouring one out for the poor plushie Mufasa who died just so he could be an accessory on a Kartrashian-DeJENNERate! But before Kylie Jenner delivered an all-cat look at the Schiaparelli show (see: that lion head, her kat klaw nails, and her serving “gassy Garfield trying to keep it sexy” in the face), she announced the replacement name for the baby boy she birthed out a year ago. Kylie and Travis have re-named their second child Aire. As for how you pronounce that, I figured “Aire” is just the exhausted exhale you make after hearing that Kylie Jenner gave her baby a name that sounds like a low-cost airline based in Europe. But according to Kylie herself, it’s simply pronounced AIR.

When 25-year-old Kylie gave birth to her second child in February 2022, she and 31-year-old Travis announced that his name was Wolf Webster. But a month later, the wolves on the Three Wolf Moon t-shirt all howled out, “THANK GOD,” when Kylie said that his name isn’t Wolf anymore because she and Travis weren’t feeling it (read: the name didn’t get them enough attention). So after presumably holding several market test meetings on names that will get more attention, they went with Aire. Over the weekend, Kylie debuted Aire’s face and do-over name on Instagram. People who were early to the post were probably confused, thinking that Kylie was celebrating baby’s first fart. But no, his name is Aire, and in these pictures, he’s probably thinking, “I went from sharing a name with a 1994 thriller starring Michelle Pfeiffer and Jack Nicholson to having a name that sounds like an air mattress company primarily marketed to Millenials through podcast advertising?!” via Complex: 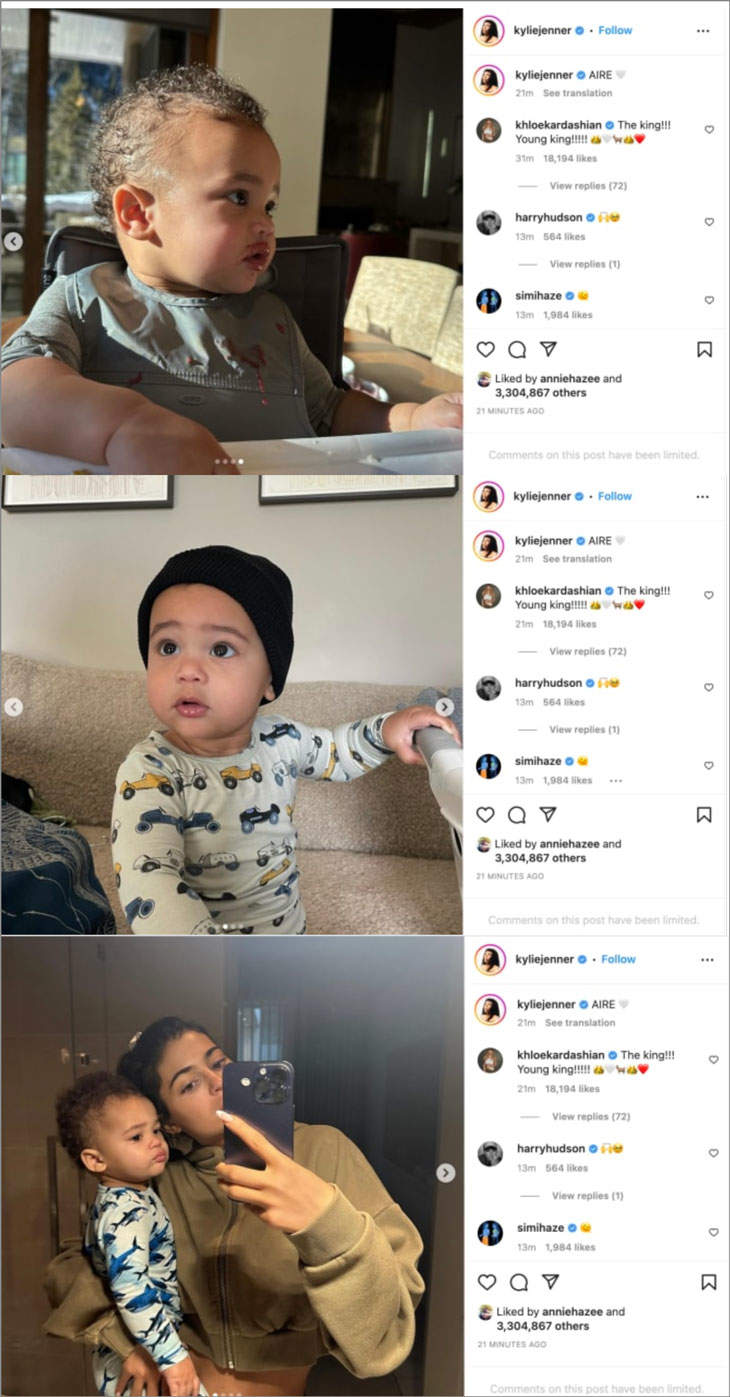 The good news for little Aire Webster, which sounds like a very special episode of Webster where Webster goes to basketball camp, is that he’s never going to go to a regular school where he’ll be bullied by peasants for his name. He’ll probably get most of his education from Kris Jenner’s Akademy For Koven Members On The Kome-Up. Aire apparently means “lion of god” in Hebrew (that explains that lion head fuckery on Kylie’s shoulder), but nobody tell him what his name means in Arabic.

Umm should someone tell Kylie Jenner she renamed her son Aire which is a common Arabic expression for ‘my penis’ or nah?

Little Aire is now baby brother to 4-year-old Stormi Webster. Yup, Stormi and Aire. So when Travis and Kylie eventually get back together to make a third kid, they’ll probably name that child either Kem Trayles or Klowdee. And when they break up after that and get back together to make a fourth child, they’ll probably hit peak weather-themed name by going with Älrokr.

Here are more pics of Kylie pissing off PETP (People For The Ethical Treatment Of Plushies), as well as Doja Cat serving heavy-flow tampon hotness at the Schiaparelli show. Tags: Baby Names, CPS Is On Line One, Doja Cat, FaSHuN, Kylie Jenner, MESS, Travis Scott
SHARE
Our commenting rules: Don't be racist or bigoted, or post comments like "Who cares?", or have multiple accounts, or repost a comment that was deleted by a mod, or post NSFW pics/videos/GIFs, or go off topic when not in an Open Post, or post paparazzi/event/red carpet pics from photo agencies due to copyright infringement issues. Also, promoting adblockers, your website, or your forum is not allowed. Breaking a rule may result in your Disqus account getting permanently or temporarily banned. New commenters must go through a period of pre-moderation. And some posts may be pre-moderated so it could take a minute for your comment to appear if it's approved. If you have a question or an issue with comments, email: [email protected]
src="https://c.statcounter.com/922697/0/f674ac4a/1/"
alt="drupal analytics" >