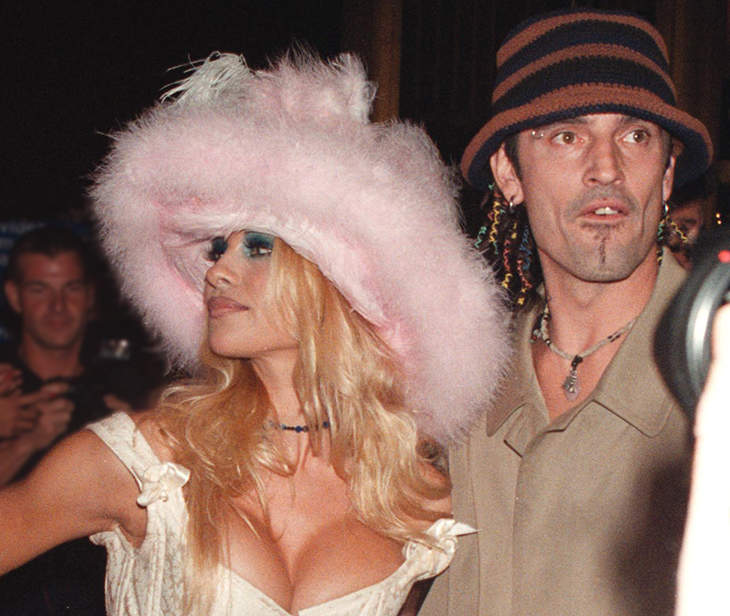 January 31st will be a big day for Pamela Anderson. On that day, her documentary, Love Pamela, will come out on Netflix, and her memoir of the same name will also be out. To promote her documentary and book, Pamela did a cover interview with People.  In her memoir, Pamela talks about it all, and of course, that means talking about Tommy Lee and their stolen sex tape. And Pamela says that Tommy is the only man she’s ever “truly” been in love with. Damn, she’s been married four-slash-five times but only really been in love once? But of course, we already know this–homegirl doesn’t think of it as love and marriage; to her, it’s just all a “bizarre lunch”

Pamela promised a tell-all after sources spoke about how she was being “re-traumatized” by the Hulu series Pam & Tommy, which focused on her stolen sex tape. Pamela would go on to marry several other men after divorcing Tommy in 1998. She married and divorced Kid Rock in 2006, then married Rick Solomon in 2007 and 2013. In 2020, she was “married” to producer Jon Peters for 12 days, but the marriage was never made legal. At the end of 2020, she married her bodyguard Dan Hayhurst before divorcing him in 2022. But apparently, only Tommy was true love.

Pamela writes how she and Tommy “just wanted to have babies and be together forever.” But this relationship sounds like a mess to me–it wasn’t always filled with the romance of Tommy honking a boat horn with his erect penis. The couple has two sons, 26-year-old Brandon and 25-year-old Dylan. In her book, Pamela writes about a night during her marriage with Tommy when he was arrested for assaulting her in front of their children. But Pamela seems to blame the release of her sex tape for creating a bigger paparazzi firestorm around the couple and ruining their relationship:

“My relationship with Tommy may have been the only time I was ever truly in love… We had fun,” she writes, “and our rule was no rules.”

But the theft of their personal tapes from a safe in their garage, which were then made into a “sex tape” sold by others, increased the tabloid and paparazzi’s relentless pursuit.

“It ruined lives, starting with our relationship–and it’s unforgivable that people, still to this day, think they can profit from such a terrible experience, let alone a crime,” writes Anderson, who has never watched the stolen tape.

With their two young sons at home, the pressures and stress ultimately overwhelmed them, she writes. One night in 1998, she says Lee twisted her arm as she was holding seven-month-old Dylan, and Brandon played nearby. “Tommy ripped Brandon off me and threw me and Dylan into a wall,” she writes. Panicked, she called 911. Tommy was arrested and served six months in jail. And, as she writes, “Our hell began.”

Pamela divorced Tommy after the incident, even though she still loved him:

“The divorce from Tommy was the hardest, lowest, most difficult point of my life,” she writes in her memoir. “I was crushed. I still couldn’t believe that the person I loved the most was capable of what had happened that night. We were both devastated, but I had to protect my babies.”

Over two decades later, she and Lee “check in, every once in a while,” she says. “Tommy is the father of my kids and I’m forever grateful.”

Pamela seems to be in a better place and talks in her documentary about the “romantic life” she’s able to live now:

“I live a more romantic life now that I’m alone than I did in relationships… l light my candles, have my music playing. I have my piano, I’m sure it would be lovely if someone else was in my life and wanted the same thing but I’ve just never met them. It’s usually about catering to them, and there has to be a balance.”

It’s something she strives for these days, as she prepares to share her full story with the world, and the lessons of self-love. “I don’t need someone to bring me roses,” Anderson says with a smile. “I’ve just planted a hundred rose bushes. I can get them any time I want–and they’re my favorite roses.”

Okay, I know Pamela said that she’s only been in love once, but what about Julian Assange? If he didn’t have whole federal governments coming for his ass, I’m sure that the two of them would be able to act on their true love. How could she forget her true love for Julian? He could be assassinated at any moment, and Pamela should know better than to give him more to worry about.

Here’s Pamela on the cover of People:

Tags: Pamela Anderson, Tommy Lee
SHARE
Our commenting rules: Don't be racist or bigoted, or post comments like "Who cares?", or have multiple accounts, or repost a comment that was deleted by a mod, or post NSFW pics/videos/GIFs, or go off topic when not in an Open Post, or post paparazzi/event/red carpet pics from photo agencies due to copyright infringement issues. Also, promoting adblockers, your website, or your forum is not allowed. Breaking a rule may result in your Disqus account getting permanently or temporarily banned. New commenters must go through a period of pre-moderation. And some posts may be pre-moderated so it could take a minute for your comment to appear if it's approved. If you have a question or an issue with comments, email: [email protected]
src="https://c.statcounter.com/922697/0/f674ac4a/1/"
alt="drupal analytics" >