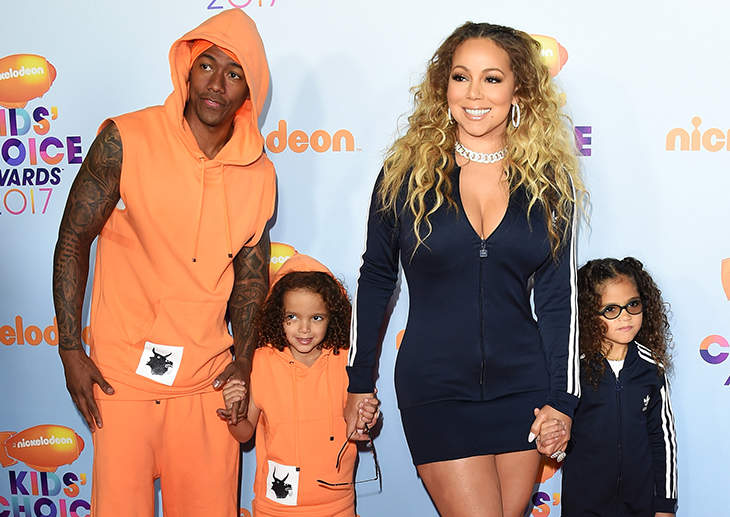 Looks like Nick Cannon’s baby-making habit has pissed off at least one of the mothers of his children–the original one, in fact. Queen of Christmas (One of many!) Mariah Carey is reportedly going to file for primary custody of their 11-year-old twins, Morocco and Monroe. The couple has been divorced since 2014 and has never fought publicly about custody stuff, so I mean… I WONDER WHY Mariah is suddenly like, “These kids need to stay with me.” Surely, it’s not related to Nick just welcoming his 12th baby to this Hellohole known as Earth. Well, it’s not like Nick has time for all these kids anyway. And having joint custody of 10/12 kids is still a good percentage!

Nick Cannon has the following children: twins Morroco and Monroe, Golden Sagon, Rise Messiah, Powerful Queen, Legendary Love, Onyx Ice, twins Zion Mixolydian and Zillion Heir, Beautiful Zeppelin, and his newest child, Halo Marie. Nick also has a son, Zen, who passed away from a brain tumor last year. Nick himself has admitted that he feels guilt over not spending a lot of time with these kids, and I guess Mariah is ready to take two of them off his hands because RadarOnline says she’s coming for primary custody. And a source tells them the main reason is Nick’s baby-making choices:

A source said that although Carey and Cannon have had an amicable joint custody arrangement since their 2014 divorce, she’s going to petition for primary custody.

“The reality of the situation is that Monroe and Moroccan are usually with Mariah anyway. Nick doesn’t see much of them,” said a source, noting he is a doting father and makes attempts to see them as much as possible.

The source further clarified, “But she wants to put him on notice that he can’t just flit in and out of their lives while he attends to his other children. And she wants legal standing as the twins’ primary caregiver.”

Carey isn’t trying to punish Cannon, the insider clarified, revealing the Vision of Love hitmaker feels compelled to do what she feels is best for their children.

RadarOnline.com has reached out to reps for Carey and Cannon for comment.

Not at all shocked to learn Nick Cannon doesn’t spend a lot of time with his first two children. The source also claims this is happening after Mariah spoke to Nick, telling him to “carve out” more time to spend with his first children. Guess he couldn’t find the time. I mean, he has to work; those kids won’t pay their own $3+ million in child support!

Poor Nick, but I’m sure he’s already knocked up another two women (at least!) to replace the two children he’s about to have less custody of. And if he hasn’t yet, expect his seed to be on the move again soon once it learns its army is dwindling.

Tags: Blame Nick Cannon, Mariah Carey, Nick Cannon
SHARE
Our commenting rules: Don't be racist or bigoted, or post comments like "Who cares?", or have multiple accounts, or repost a comment that was deleted by a mod, or post NSFW pics/videos/GIFs, or go off topic when not in an Open Post, or post paparazzi/event/red carpet pics from photo agencies due to copyright infringement issues. Also, promoting adblockers, your website, or your forum is not allowed. Breaking a rule may result in your Disqus account getting permanently or temporarily banned. New commenters must go through a period of pre-moderation. And some posts may be pre-moderated so it could take a minute for your comment to appear if it's approved. If you have a question or an issue with comments, email: [email protected]
src="https://c.statcounter.com/922697/0/f674ac4a/1/"
alt="drupal analytics" >