Jennifer Coolidge Stole The Show At The Golden Globes 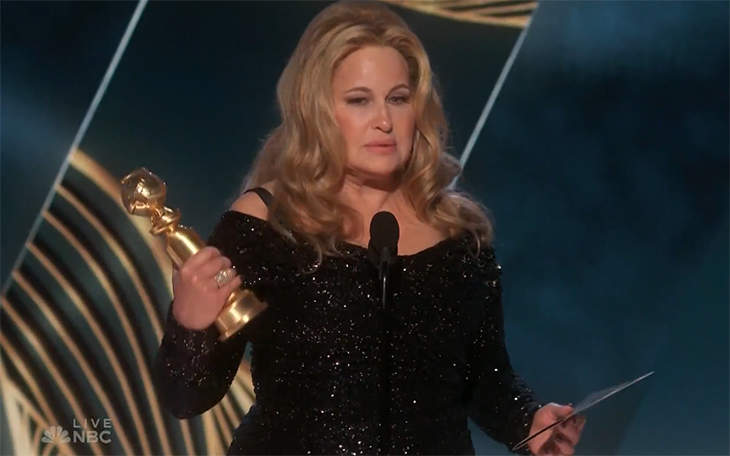 If you still haven’t seen White Lotus season two, then stay away from all Jennifer Coolidge posts on the internet today, including this one, because you will be spoiled. Jennifer Coolidge starred in the series as Tanya McQuoid, and last night, she picked up a Golden Globe for her performance in the show’s second season. And Jennifer Coolidge’s acceptance speech was pure Jennifer Coolidge. Now, the Internet wants her to host the next award show, but then that’ll mean the ceremony would need to be extended by at least 4 hours since she’s got a lot to say!

First, Jennifer stole more of our hearts by presenting the award for Best Supporting Actor in a Television Series, telling the story of when she accepted the presenting gig. You can practically hear the nominees thinking, “Get to it already!”

Jennifer Coolidge presents the awards for Best Supporting Actor in a Television Series at the #GoldenGlobes. pic.twitter.com/0tCDVio3Sn

Then, Jennifer got her own golden statue, as the actress won Best Supporting Actress in a Limited Series. She had been nominated alongside White Lotus co-star Aubrey Plaza, Claire Danes for Fleishman Is in Trouble, Daisy Edgar-Jones for Under the Banner of Heaven, and Niecy Nash-Betts for Dahmer. When Jennifer won, she gave an awards speech so funny and moving that she brought White Lotus creator Mike White to tears. via NME:

“I can put this down, right?” Coolidge joked of the trophy as she came up to the stage. “I don’t work out, you know? What I mean is I can’t hold it that long.”

She then continued to reflect on her career, getting tearful as she recalled the “five people that kept me going for 20 years with these little jobs,” including Ryan Murphy, Michael Patrick King, and Reese Witherspoon. “I didn’t know anybody and it was sort of this thing that wasn’t going anywhere,” she explained. “Then there would be these people who would give you these cute little jobs and it would be enough to go to the next one and the next one.”

Referring to her appearance at the 2022 Emmys, she added that a “hook” had taken her off stage before she was able to finish her speech at that event and took the opportunity to share her thoughts at the Golden Globes instead. Addressing The White Lotus creator Mike White, Coolidge said: “Truly I just want you all to know I had such big dreams and expectations as a young person, but what happened is they sort of fizzled by life. I thought I was gonna be the queen of Monaco, even though someone else did it.”

“I had these giant ideas and then you get older and you think, “Oh what the fuck is going to happen?” And I just want to say, Mike White, you have given me hope. You’ve given me a new beginning–even if this is the end, because you did kill me off. You changed my life in a million different ways. My neighbours are speaking to me, things like that. I was never invited to one party on my hill and now everyone’s inviting me.”

After the show, Jennifer found out that Twitter is ready for her to host next year’s Golden Globes, but I think she’d rather just be a fun mess at the party rather than deal with hosting it:

Jennifer Coolidge reacts to Twitter wanting her to host the next #GoldenGlobes! Full interview: https://t.co/73ZSqSvoAp pic.twitter.com/OSIhM2tiEZ

And while the broadcast didn’t really catch it, those celebrities knew to pay respect to some REAL talent, and Jennifer got a standing ovation after her acceptance speech:

Not sure if they showed this but Jennifer Coolidge got the hugest standing ovation for that epic speech after leaving the stage. #GoldenGlobes2023 pic.twitter.com/EQSW2bhy3c

Jennifer is a gem. Mike needs to find a way to bring Tanya back for season 3 of White Lotus. Maybe she has a secret twin sister? Maybe she comes back as a ghost to get revenge on the evil gays of the world? Just write her a role that will win her another Golden Globe so she can take the shit show off the rails again next year!

Tags: 2023 Golden Globes, Golden Globes, Jennifer Coolidge
SHARE
Our commenting rules: Don't be racist or bigoted, or post comments like "Who cares?", or have multiple accounts, or repost a comment that was deleted by a mod, or post NSFW pics/videos/GIFs, or go off topic when not in an Open Post, or post paparazzi/event/red carpet pics from photo agencies due to copyright infringement issues. Also, promoting adblockers, your website, or your forum is not allowed. Breaking a rule may result in your Disqus account getting permanently or temporarily banned. New commenters must go through a period of pre-moderation. And some posts may be pre-moderated so it could take a minute for your comment to appear if it's approved. If you have a question or an issue with comments, email: [email protected]
src="https://c.statcounter.com/922697/0/f674ac4a/1/"
alt="drupal analytics" >