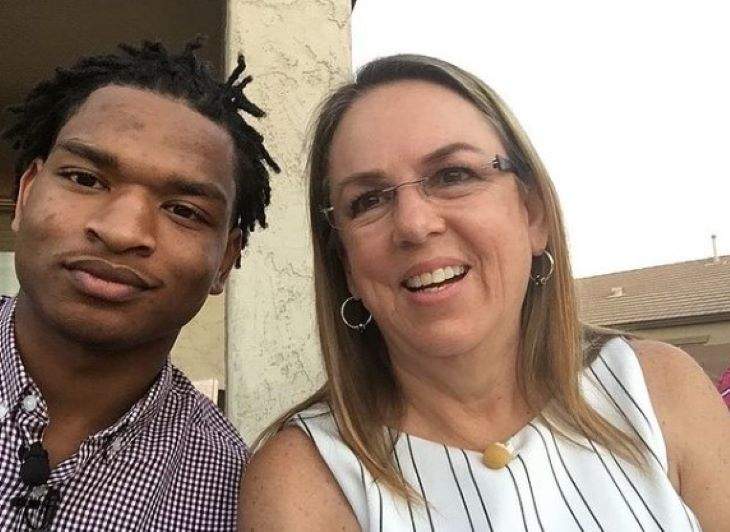 People says that Wanda and Jamal first broke bread on Thanksgiving 2016. Despite that being the time when political tensions were reaching a fever pitch, things between them went swimmingly, and no one yelled, “WOAH WAIT, SHOULDN’T ALL LIVES MATTER?!” while chucking their fancy Chinet paper plate at the dining room wall. So, they’ve kept the tradition alive and have been warming the internet’s heart since.

The two pals first met in November 2016, when Dench sent her 24-year-old grandson a text inviting him over for Thanksgiving dinner. Unbeknownst to her, though, her grandson had switched his phone number — and Hinton, then 17, got her message instead.

After some initial confusion, and the strangers sent selfies to each other that confirmed the mix-up. But when Hinton asked if he could still come over for dinner, Dench, now 65, texted back, “Of course you can. That’s what grandmas do … feed everyone.”

Here’s Jamal assuring everyone that he’s eating at Wanda’s house again this year:

The tale has become such a Thanksgiving staple that Netflix approached the makeshift family about adapting the serendipitous meeting into a movie (OF COURSE!). But Jamal and Wanda say they don’t just do this for the notoriety; they’re genuine friends for life and keep in contact regularly.

The two also appeared in a taped segment on the Today show, Wednesday, where they both discussed the impact their bond has had on their lives.

“He’s literally changed my life and my point of view on young generations about being open to friendships when you think you have nothing in common with somebody,” noted Dench. “But when you just sit and talk to them? Oh my gosh… ”

“I honestly don’t know where I would be sometimes,” Hinton said. “It’s amazing to have her as a friend and as my family. We always talk about — I told her, ‘The cameras and the fame can stop tomorrow and nothing is changing between us.’ ”

“Absolutely,” Dench added. “He’s in my heart for life.”

The two don’t just talk on Thanksgiving, either. They’re in constant contact throughout the year, having dinners and catching up on the phone.

It's time for one of our favorite holiday traditions 🥺 The heartwarming tale of a grandmother mistakenly texting a teenage boy bringing the strangers together for Thanksgiving, has continued for a 7th year — and @kristendahlgren got a chance to catch up with them! pic.twitter.com/24SK9xSDJy

So, there’s always hope that you might just be one mistaken text away from not having to get drunk as fuck to endure a dry-ass turkey dinner with your neck-bearded uncle who isn’t legally allowed to own a firearm but makes sure to keep his NRA hat on at the table. Happy Thanksgiving!

Tags: Awwwww, Netflix, Nice Things, Open Post
SHARE
Our commenting rules: Don't be racist or bigoted, or post comments like "Who cares?", or have multiple accounts, or repost a comment that was deleted by a mod, or post NSFW pics/videos/GIFs, or go off topic when not in an Open Post, or post paparazzi/event/red carpet pics from photo agencies due to copyright infringement issues. Also, promoting adblockers, your website, or your forum is not allowed. Breaking a rule may result in your Disqus account getting permanently or temporarily banned. New commenters must go through a period of pre-moderation. And some posts may be pre-moderated so it could take a minute for your comment to appear if it's approved. If you have a question or an issue with comments, email: [email protected]
src="https://c.statcounter.com/922697/0/f674ac4a/1/"
alt="drupal analytics" >