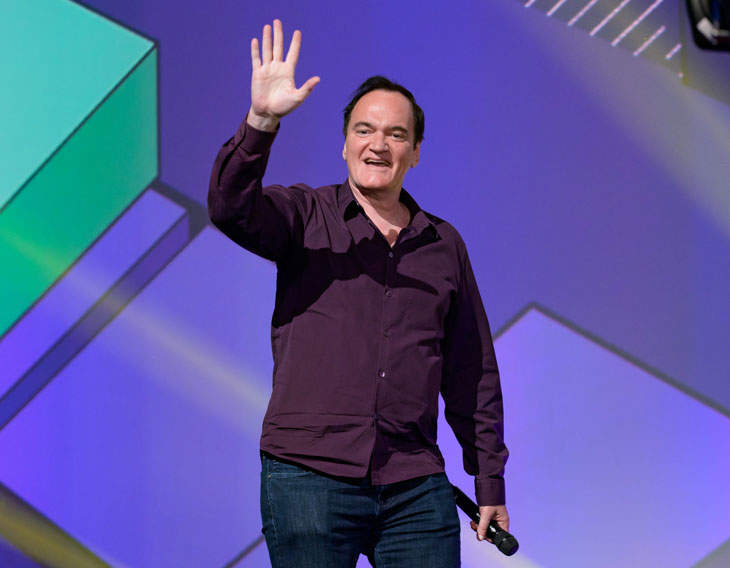 If you’ve ever seen any movies by Quentin Tarantino, you know you’re going to experience three things; gore, some lady’s pretty feet, and hearing the N-word multiple times. Because nothing makes QT’s nipples dance like feet and giddily writing the N-word. And if you feel the same way I do, it really doesn’t matter because Quentin doesn’t care. If you don’t like his movies, here’s his suggestion: just don’t watch them.

Stretching back to his early Pulp Fiction days and before that, Quentin has been scrutinized for the violence in his movies and for freely using the N-word in scripts. In 2012’s Django Unchained (or as I like to call it, Kanye’s Wet Dream), the word was used over 100 times, and I don’t know why every chapter of the NAACP wasn’t waiting for him outside of the set for a new march called the Billion Brotha Beatdown. But during an interview on the HBO Max series Who’s Talking To Chris Wallace (via Variety), QT made it clear that even if the NAACP were there, it wouldn’t affect how he chooses to express himself. And if you don’t like it, TOUGH! Because he’s not changing anything.

The director had no apologies or regrets when recently asked by Chris Wallace about the backlash he often gets from viewers. Tarantino was a guest on Wallace’s HBO Max talk series “Who’s Talking to Chris Wallace” and said that people who don’t like the content in his movies just shouldn’t see them, period.

“You talk about being the conductor and the audience being the orchestra,” Wallace told Tarantino. “So when people say, ‘Well there’s too much violence in his movies. He uses the N-word too often.’ You say what?”

“You should see [something else],” Tarantino answered. “Then see something else. If you have a problem with my movies then they aren’t the movies to go see. Apparently I’m not making them for you.”

So then, who are you making your movies for, Quentin? Sadists? The Klan? But QT does have a defender in Samuel L. Jackson, who’s starred in Pulp Fiction, Jackie Brown, Kill Bill: Volume 2, Inglourious Basterds, The Hateful Eight, and Django Unchained. In a 2019 interview with Esquire, SLJ defended QT’s use of the slur, which might’ve made QT feel like an honorary member of the club.

“It’s some bullshit,” Jackson once told Esquire magazine about the backlash. “You can’t just tell a writer he can’t talk, write the words, put the words in the mouths of the people from their ethnicities, the way that they use their words. You cannot do that, because then it becomes an untruth; it’s not honest. It’s just not honest.”

Also, during QT’s interview with Chris Wallace, he was asked about Harvey Weinstein’s downfall. QT and Harvey made nine movies together, and QT heard skeezy stories about Harvey but never any accusations of rape. And QT wishes he would’ve talked to Harvey about it, but it was a “real hard conversation” for him to bring up:

“I’d never heard the stories that later came out at all,” Tarantino told Wallace. “I heard the same stories that everybody had heard. What I wish I had done was talk to Harvey about it and say, ‘Harvey, you can’t do this.’ To tell you the truth, I chalked it up to a ‘Mad Men’-era version of the boss chasing the secretary around the desk. I’m not saying that’s ok. That’s how I heard it … in that category. There was never any talk of rape or anything like that.

“The reason I didn’t [say something to Weinstein] was because that’s a real hard conversation to have,” Tarantino admitted. “I felt it was pathetic. I felt what he was doing was pathetic and I didn’t want to deal with his pathetic-ness.”

Tarantino said he didn’t realize how serious Weinstein’s misconduct was.

“I didn’t think it was, ‘Ok, you do this for me or you’re not going to get this movie.’ I never heard any actresses say anything like that,” Tarantino added. “It was just, you know, ‘Don’t get in the back of a limo with him.’ It was easy to compartmentalize that to some degree. Anyway, I feel bad about … what I feel bad about is I feel bad that I did not have a man-to-man talk with him about it.”

So every time QT had the thought of talking to Harvey Weinstein, he thought, “Naw, that’s too hard. Instead, I’ll do something easy, like write the N-word again!”

Tags: Quentin Tarantino
SHARE
Our commenting rules: Don't be racist or bigoted, or post comments like "Who cares?", or have multiple accounts, or repost a comment that was deleted by a mod, or post NSFW pics/videos/GIFs, or go off topic when not in an Open Post, or post paparazzi/event/red carpet pics from photo agencies due to copyright infringement issues. Also, promoting adblockers, your website, or your forum is not allowed. Breaking a rule may result in your Disqus account getting permanently or temporarily banned. New commenters must go through a period of pre-moderation. And some posts may be pre-moderated so it could take a minute for your comment to appear if it's approved. If you have a question or an issue with comments, email: [email protected]
src="https://c.statcounter.com/922697/0/f674ac4a/1/"
alt="drupal analytics" >