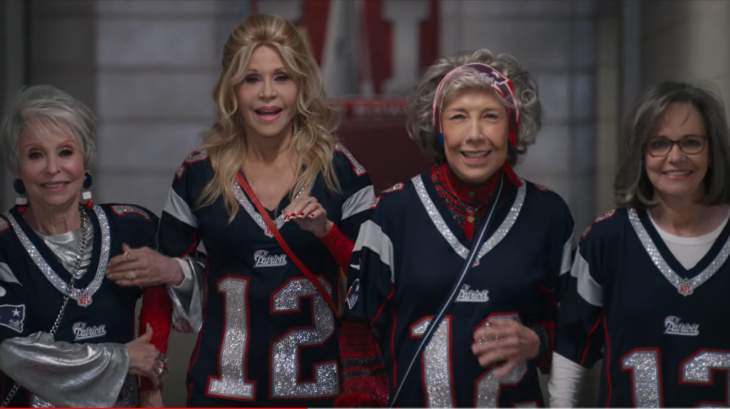 Variety reports that 80 for Brady is “based on a true story,” so we have no choice but to believe that a 45-year-old quarterback lost his wife so he could moonlight as a movie producer who only produces movies about himself, a 45-year-old quarterback who lost his wife because he didn’t know when to quit. Why Jane Fonda, Lily Tomlin, Rita Moreno, and Sally Field agreed to portray the daffy, clueless, horny, 80-year-old bedazzled NEW ENGLAND PATRIOTS FANS in Tom’s auto-erotic fever dream is beyond me. Here’s the trailer, which also includes appearances by Billy Porter, Ron Funches, Jimmy O. Yang, the aforementioned Guys Fieri, and Harry Hamlin phoning it in as a man who might consider fucking the 80-year-old character who’s had the LEAST amount of work done. Based on a “true story,” my ASS.

I mean, I get it. If I had a wife and bunch of kids nagging me all the time and millions of dollars to spend on myself (and counting. Backwards.), I’d try to avoid them too by starting my own vanity project production company so I could run off with my BFF to relive our glory days and maybe, perhaps, explore some of our deepest, darkest sexual fantasies in the process. Why do I get the sneaking suspicion that this movie is made entirely from the discarded edits of Super Bowl commercials? Thank GOD Dolly Parton had the sense to tell Jane and Lily she’d catch up with them another time.

Tags: Billy Porter, Gisele Bundchen, Guy Fieri, Harry Hamlin, Jane Fonda, Lily Tomlin, Open Post, Rita Moreno, Sally Field, The Gronk, Tom Brady, Trailers, Why Tho
SHARE
Our commenting rules: Don't be racist or bigoted, or post comments like "Who cares?", or have multiple accounts, or repost a comment that was deleted by a mod, or post NSFW pics/videos/GIFs, or go off topic when not in an Open Post, or post paparazzi/event/red carpet pics from photo agencies due to copyright infringement issues. Also, promoting adblockers, your website, or your forum is not allowed. Breaking a rule may result in your Disqus account getting permanently or temporarily banned. New commenters must go through a period of pre-moderation. And some posts may be pre-moderated so it could take a minute for your comment to appear if it's approved. If you have a question or an issue with comments, email: [email protected]
src="https://c.statcounter.com/922697/0/f674ac4a/1/"
alt="drupal analytics" >