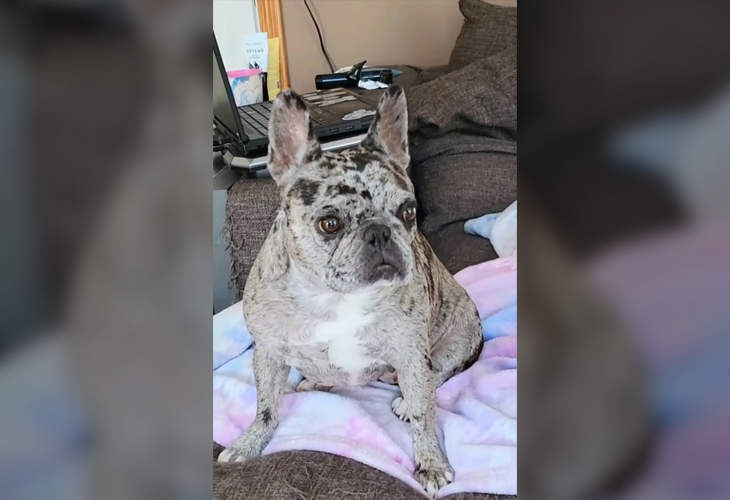 For those of you who think animals aren’t people, may I present to you a dog that is a full-fledged stan! Meet Rory the French bulldog. She’s a posh pup who loves wet food, a good rub, and Superman actor Henry Cavill. You thought a man’s ability to worship someone famous they don’t know was special, but it turns out that canines can too be obsessed with pretty celebrities!

Rory is already a little internet famous. She has over 200,000 TikTok followers who love to watch the speckled Frenchie dress up in costumes and fool around. It was only recently that Rory’s human, Heather Land, discovered that her dog wanted to sniff Henry Cavill’s butt. Better get in line, Rory. There are about a zillion other people ahead of you! via Newsweek:

“Rory has never been one to watch anything on TV,” Land said. “But a few weeks ago, I started rewatching The Witcher, and I noticed every time Geralt [played by Henry Cavill] was on screen, she would stare at him. It was so odd to me, so I recorded a few small clips of her watching him and posted [those] to social media.”

She’s a woman of impeccable taste, what can I say? #grumpyoreo #Rory #FavoriteShow #dogsoftiktok #FunnyDog #HenryCavill

In the video’s voiceover, Heather states that Rory might like Cavill’s character as much as she likes chicken nuggets. That’s a big endorsement. Some were curious if it was just Cavill in a wig that appealed to Rory or the man himself.

“People were wondering if it’s the character Geralt that she likes or if she likes Henry Cavill, so I wanted to test that theory,” Land told Newsweek. “I played Man of Steel for her so she could see Henry Cavill in a different role, and I was actually shocked that she sat and watched him the entire time he was on.”

Replying to @__marrriia__ Like I said, she’s a woman with impeccable taste! I guess I know the answer now! What else should we watch? #dogsoftiktok #Rory #HenryCavill #Superman #FunnyDog

When The Witcher isn’t on, Heather placed a picture of Rory’s beau next to her favorite couch to help with her obsession. This is a serious case of the stans! Heather better keep the teen mags and scissors out of view because if Rory gets her paws on them, there’ll be Henry Cavill cutouts and posters all over the walls!

Tags: Animal Stories, Cute Animals, Dogs, Henry Cavill, Open Post
SHARE
Our commenting rules: Don't be racist or bigoted, or post comments like "Who cares?", or have multiple accounts, or repost a comment that was deleted by a mod, or post NSFW pics/videos/GIFs, or go off topic when not in an Open Post, or post paparazzi/event/red carpet pics from photo agencies due to copyright infringement issues. Also, promoting adblockers, your website, or your forum is not allowed. Breaking a rule may result in your Disqus account getting permanently or temporarily banned. New commenters must go through a period of pre-moderation. And some posts may be pre-moderated so it could take a minute for your comment to appear if it's approved. If you have a question or an issue with comments, email: [email protected]
src="https://c.statcounter.com/922697/0/f674ac4a/1/"
alt="drupal analytics" >