Adam Levine Denies Having An Affair With Instagram Model Sumner Stroh, But Says He “Crossed A Line” 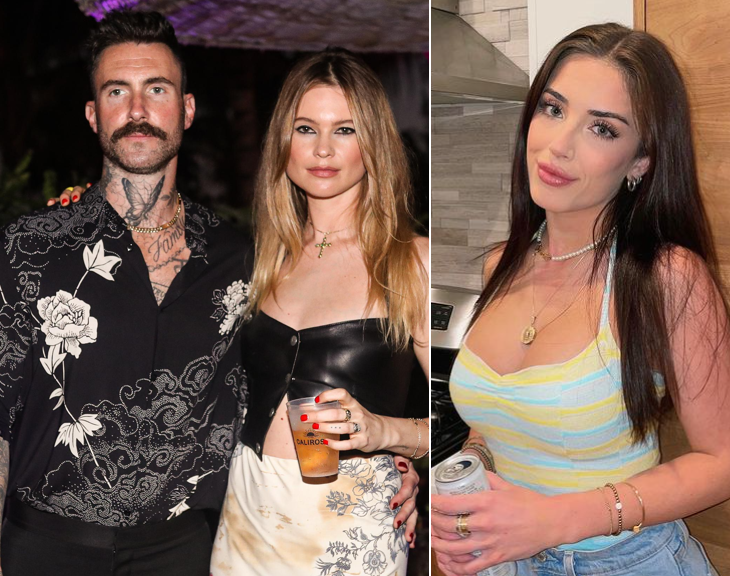 Yesterday, Instagram-model-type Sumner (SumNer) Stroh took to TikTok to claim she had a year-long affair with Adam Levine, who’s been married to Victoria’s Secret model Behati Prinsloo since 2014. SumNer also showed screenshots of DMs that show Adam asking if it was cool if he named his and Behati’s upcoming third baby “SumNer.” The (alleged) gall! Most people believed SumNer’s allegations, because, well… it’s Adam Levine. It would be more of a shock if he wasn’t cheating on his wife with a 23-year-old Insagram model. But, earlier today, 43-year-old Adam posted a denial/non-apology to his Instagram Story. He writes that he used “poor judgment” in flirting with SumNer, but claims they never had an affair. Adam admits he was “stupid” and “naive” (hey, you stole that word from SumNer!) to risk his family, but “we will get through it together.” So, Adam is implying that Behati’s not gonna leave him, which is downright rude. It’s been less than 24 hours since this news broke, give the gal some time to make a measured decision. One that hopefully includes siphoning every last cent outta that turd’s savings account.

Here’s Adam’s full statement, in which he never apologizes once and claims to have already “addressed” his “inappropriate” actions and taken full responsibility (examples, please!):

A lot is being said about me right now and I want to clear the air. I used poor judgment in speaking with anyone other than my wife in ANY kind of flirtatious manner. I did not have an affair, nevertheless, I crossed the line during a regrettable period in my life. In certain instances, it become inappropriate; I have addressed that and taken proactive steps to remedy this with my family.

My wife and my family is all I care about in this world. To be this naive and stupid enough to risk the only thing that truly matters to me was the greatest mistake I could ever make. I will never make it again. I take full responsibility. we get through it. And we will get through it together.

Adam Levine denies having an affair with model Sumner Stroh, but admits he “crossed the line”:

“I did not have an affair, nevertheless, I crossed the line during a regrettable period of my life.” pic.twitter.com/Ro9NcoZ41M

Now, back to SumNer. SumNer got some shit online because many thought she was trying to present herself as the victim. In her initial accusation, she claimed she was young and naive when she was with Adam, and said that she was exploited and manipulated. But, as many of SumNer’s critics point out, she is a full adult who made a choice to be with a married man. To further complicate matters, SumNer posted this TikTok during her alleged affair with Adam. Apparently, the song in the background is by Maroon 5:

NOT THE GIRL WHO HAD AN AFFAIR W ADAM LEVINE POSTING THIS DURING THEIR ALLEGED AFFAIR pic.twitter.com/r90IgxmX15

Someone commented on SumNer’s accusation, “It’s no secret he’s been married for a decade. The only victim here is his wife and children.” So, SumNer posted a video response. She says she rushed her first video because, yesterday morning, a tabloid reached out to her to comment on the affair (Sumner says her friend sold the DM screenshots to the tabloid), and she wanted to get ahead of the story. SumNer says she didn’t mean to gloss over the fact that Adam initially led her to believe that he and Behati’s marriage was over:

I believed that they were keeping it quiet to avoid the negative press, because, as I had said, I was new to LA. So I just assumed with celebrities of that caliber, that that’s just how it was. And that’s why I feel exploited, cuz he knew I believed everything that he said. Because of my vulnerable position of being new to LA.

Also, he was DMing straight from his verified Instagram account. I didn’t have any reason to further question it. But now I realize that was likely a manipulation tactic of his… hiding in plain sight. As soon as I realized that was not the case, I had cut things off with him.

In retrospect, I wish I would’ve questioned things more. I wish I wasn’t so naive. But, you know, being naive is not an excuse for what I did and the role I played in this. Again, in no way was I trying to gain sympathy, and I fully realize I was not the victim in this.

I’m not the one who’s really getting hurt here. It’s Behati and her children, and, for that, I’m so, so sorry.

Then, SumNer hopped on over to Page Six:

She went on to claim to Page Six exclusively that the cheating began “last year” when she “graduated college,” noting that she has not spoken to the former “The Voice” coach “for months” since their alleged “physical” affair.

SumNer’s response video was posted yesterday afternoon. Adam’s denial came out this morning. The question is… will SumNer show the receipts (you know that scumbag sent dick pics)? Or will those Maroon 5 lawyers pay her off and get her to take down those TikToks? Either way, SumNer’s won. Since yesterday, her social media accounts have exploded, and she currently has over 400,000 followers on TikTok. A Star is Born!

And it looks like Adam is in for even more shit, cuz two other girls just came forward with their own flirty DMs! First up, Alyson Rosef. Here are Alyson’s TikToks, which show flirty DMS. Adam writes, “I shouldn’t be taking to you you know rhst [that] richt [right]?” In another exchange, she tells him she likes metal music, and he writes, “Said no hot chicks ever other than you.” Alyson encourages other girls to come forward with their Adam messages:

Then there’s Maryka, who posted her proof to her Instagram Stories. Another woman, @igfamousbydana, helpfully re-posted a summary of Maryka’s accusations to her Instagram. The DMS are extremely damning. Adam says he is “obsessed” with Maryka and her “absurd” body, and claims his marriage is “complicated”:

The best Adam-to-Maryka screenshot is this one, in which this modern love poet waxes on about his paramour’s ass: Tags: Adam Levine, Behati Prinsloo, Cheaters, Gross Shit
SHARE
Our commenting rules: Don't be racist or bigoted, or post comments like "Who cares?", or have multiple accounts, or repost a comment that was deleted by a mod, or post NSFW pics/videos/GIFs, or go off topic when not in an Open Post, or post paparazzi/event/red carpet pics from photo agencies due to copyright infringement issues. Also, promoting adblockers, your website, or your forum is not allowed. Breaking a rule may result in your Disqus account getting permanently or temporarily banned. New commenters must go through a period of pre-moderation. And some posts may be pre-moderated so it could take a minute for your comment to appear if it's approved. If you have a question or an issue with comments, email: [email protected]
src="https://c.statcounter.com/922697/0/f674ac4a/1/"
alt="drupal analytics" >