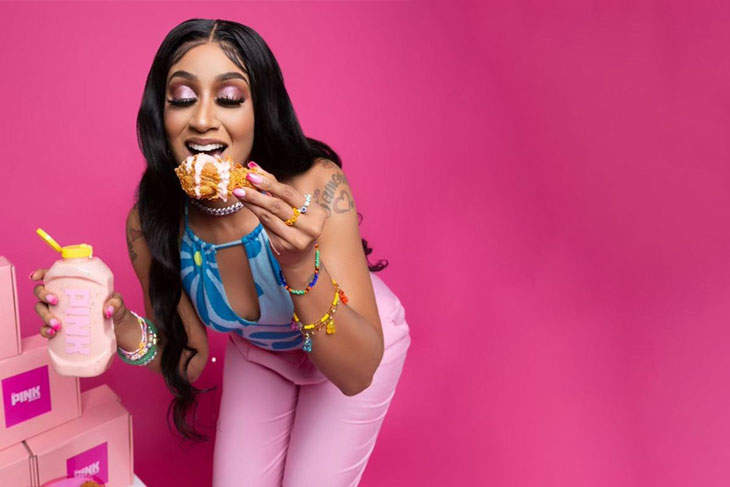 This summer’s hottest risky food item was Pink Sauce, a–wait for it– sauce that’s pink made viral on TikTok by mastermind, Chef Pii (legal name: Veronica Shaw). However, in Pink Sauce’s short stint in the limelight, Chef Pii has had to deal with a few hiccups, like people complaining about her shipping the dairy-containing, shelf-unstable sauce to them in the summer heat and it obviously showed up an exploded, hot rancid mess. Then, the pesky FDA poked their nose into her venture (despite her not knowing who they were or what they do) to stop this mess since Pink Sauce wasn’t FDA approved. All seemed lost for everyone who wanted record themselves biting into chicken smothered in a milky pink sauce to post on the internet for virtual validation, as Chef had to hang up her sauce production for a beat. But lucky for Chef Pii, Dave’s Gourmet, the company behind the popular torture condiment, Dave’s Insanity Sauce, is taking her Pink Sauce under their (hot buffalo) wing to help her mass produce it.

Bon Appétit said that Dave’s Gourmet saw the floundering Pink Sauce’s demographic as an opportunity to boost their own sales and swooped right in. They’re going to start mass producing it ASAP before TikTok moves on to the next questionable food fad.

Dave’s Gourmet president David Neuman tells Bon Appétit that his team is already working around the clock to concoct a shelf-stable version of the product at the speed of TikTok’s notoriously short attention span. Dave’s Gourmet, founded by Dave Hirschkop, is perhaps best known for its ultra-spicy Dave’s Insanity Sauce, commonly featured on YouTube series Hot Ones. With Pink Sauce, the company hopes Chef Pii’s preexisting following will constitute a new, untapped consumer market. “We want to get to the millennials; we want to be a hip company,” Neuman told Bon Appétit in an interview. “And she’s hip. And she is a millennial.”

And according to Eater Dallas, Dave’s Gourmet basically acknowledged that Chef Pii doesn’t know anything about food, mass production, or food mass production, but still thinks this will be a lucrative deal because they know how to get shit done.

A Wednesday, August 17, press release announced a partnership between Dave’s Gourmet and Chef Pii, gently alluding to her “lack of commercial food production knowledge” that “led to significant obstacles. Our R&D team was able to re-formulate the sauce to match Chef Pii’s exact color and flavor profile for the product and at the same time change some of the ingredients to make the sauce less complicated, dairy-free, and clean of any preservatives, artificial colors or flavors.

Some fast food and store chains are already knocking on the door to get their hands on Chef Pii’s creation. via Bon Appétit:

According to Neuman and Chef Pii, although Dave’s Gourmet is only about 10 days into “the R&D,” fast food chains and big-name retailers are already calling every day, lining up to get their hands on the sauce of the moment.

So where we all saw a dumb, gross TikTok food that sounded like a deep south delicacy that resulted from when one bull kicks another bull in the testicles and he reflexively ejaculates into a trough only for a toothless farmer to collect and bottle, Dave’s Gourmet saw dollar signs; so Pink Sauce is here to stay and will be on store shelves sometime in the fall, just in time for you to grab it to have a dipper for your Tailgate Candy Corn or squirt on your pink candy-flavored Kraft Mac & Cheese.

Tags: Open Post, Stupid Food, TikTok
SHARE
Our commenting rules: Don't be racist or bigoted, or post comments like "Who cares?", or have multiple accounts, or repost a comment that was deleted by a mod, or post NSFW pics/videos/GIFs, or go off topic when not in an Open Post, or post paparazzi/event/red carpet pics from photo agencies due to copyright infringement issues. Also, promoting adblockers, your website, or your forum is not allowed. Breaking a rule may result in your Disqus account getting permanently or temporarily banned. New commenters must go through a period of pre-moderation. And some posts may be pre-moderated so it could take a minute for your comment to appear if it's approved. If you have a question or an issue with comments, email: [email protected]
src="https://c.statcounter.com/922697/0/f674ac4a/1/"
alt="drupal analytics" >