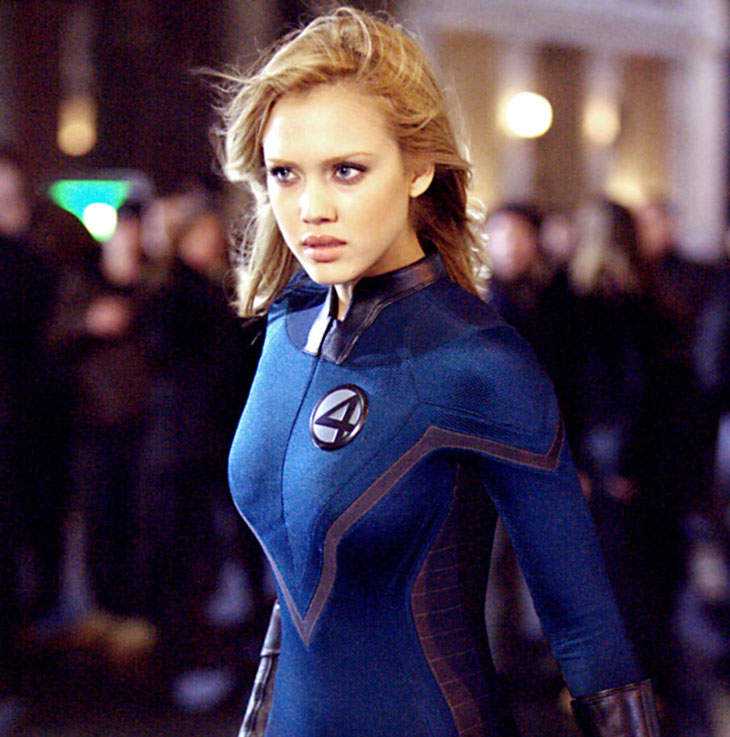 Diversity is apparently the bugbear of every casting director in Hollywood. How can we tell the story of an East Asian woman who overcame the odds WITHOUT casting Scarlett Johansson? It’s impossible. Some are taking note of this slow embrace of diversity and one of those champions is Jessica Alba. A proud Latin woman, Jessica, who was put in a blond wig and blue contacts for a superhero movie (see: Jessica Alba as Sue Storm above), thinks that Marvel’s casting choices are as white as a Wes Anderson movie.

The very honest founder of The Honest Company was interviewed by Glamour UK and had some things to say about Marvel’s inability to hire people who don’t have blond hair and blue eyes. People shared the details:

In a cover interview for Glamour UK‘s July/August issue, the 41-year-old actress — who has been open in the past about her Latina roots — says she believes the superhero giant’s films are “still quite Caucasian.”

“Even if you look at the Marvel movies — that’s the biggest driver of fantasy and what’s happening right now in entertainment, because it’s sort of the family thing — it’s still quite Caucasian,” said Alba, who played Sue Storm/the Invisible Woman in Fox’s Fantastic Four (2005) and the 2007 sequel Fantastic Four: Rise of the Silver Surfer.

While that last line about her superhero credentials might seem innocuous, it contains multitudes. Yes, before comic book movies were good, Jessica Alba starred in the much-maligned Fantastic Four, and its sequel. If you don’t remember her actually being in that trainwreck, it’s probably because she was whitewashed, and played the sister of famous white boy Chris Evans. She went on to say:

“I would say I was one of the few back in the day … and it was before Marvel was sold to Disney … but it’s still quite … more of the same,” added the actress and Honest Company founder.

Ah, yes. Back in the day. When all we had was Jennifer Lopez starring all the Latina roles and Jessica Alba was forced to don that limp blonde rag on her head. Jessica Alba isn’t alone, though. In 2020, Anthony Mackie said that Marvel needed more diversity when it comes to behind-the-scenes roles. And in 2018, Marvel’s president Kevin Feige said that they were making moves to be more diverse. Some examples of those moves: Black Panther came out and became a massive hit in 2018, and its sequel is due later this year. Shang-Chi and the Legend of the Ten Rings came out last year and its sequel is in the works. And more recently, Iman Vellani played the first Muslim Marvel Superhero in Disney+’s Ms. Marvel series.

But for now, Jessica is out of the acting game, so Marvel can’t call her up as their diversity hire. She’s far too busy for that sort of thing. Skin-searing empires can’t run themselves, dammit!

Tags: Jessica Alba, Marvel
SHARE
Our commenting rules: Don't be racist or bigoted, or post comments like "Who cares?", or have multiple accounts, or repost a comment that was deleted by a mod, or post NSFW pics/videos/GIFs, or go off topic when not in an Open Post, or post paparazzi/event/red carpet pics from photo agencies due to copyright infringement issues. Also, promoting adblockers, your website, or your forum is not allowed. Breaking a rule may result in your Disqus account getting permanently or temporarily banned. New commenters must go through a period of pre-moderation. And some posts may be pre-moderated so it could take a minute for your comment to appear if it's approved. If you have a question or an issue with comments, email: [email protected]
src="https://c.statcounter.com/922697/0/f674ac4a/1/"
alt="drupal analytics" >