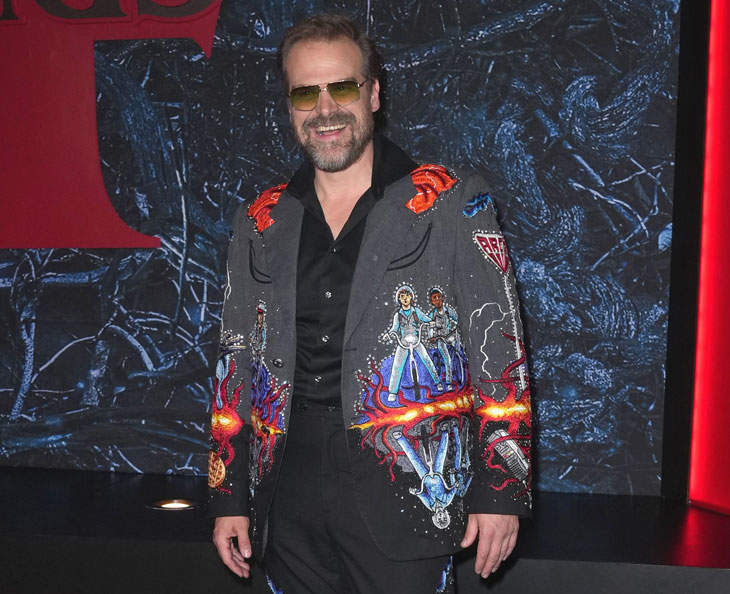 Stranger Things is back (and over already if you binged the new season) and with it comes news about America’s favorite sexy dad man, David Harbour. Yeah, it’s been a little while since the series last aired, so we haven’t heard much from David since his stunt Las Vegas wedding to Lily Allen in 2020. David is here to remind us that he’s not just kicking back on the couch eating bonbons like a regular married man, he’s a hardworking actor! But not a method actor. That stuff’s for try-hards like Jared Leto!

Like most of us in our youth, David also experimented with some strange things. One of those being the controversial practice of method acting. via the New York Post:

The “Stranger Things” star recently told GQ about his brief fling with method acting and how far he almost dived into it.

“When I was younger — it’s so embarrassing — but I remember playing that famous Scottish king,” he told the magazine.

“And being like, ‘I’m gonna kill a cat’ or something: ‘I’m gonna go murder something to know what it feels like to murder.’ I didn’t actually do it, obviously. Not only is that stuff silly, it’s dangerous, and it actually doesn’t produce good work.”

So, you’re telling me I don’t have to send dead rats to people to get the starring role in my local theater’s production of The Music Man?? Thank goodness David didn’t go full edgelord and sacrifice a poor pussy to the acting gods. You can safely keep your boner for Sheriff Hopper! After revealing that he toyed with the concept of murder, David went on to further disparage the concept of method acting.

Harbour said that Day-Lewis, who practices the method, is “an extraordinary actor,” but “when he explains his process it sounds like nonsense to me.”

David’s not alone in his views. He follows in the steps of other method actor haters like Will Poulter, Mads Mikkelsen, and the legendary Laurence Olivier who was famously rumored to have shaded method acting proponent Dustin Hoffman by telling him, “Try acting, dear boy… It’s much easier.” (Takedowns were deliciously classier back in the day.) We can rest assured that David didn’t go method to play a cop on a Netflix show. But instead of murdering a cat for Stranger Things, David murdered his love of full fatty meals to lose 80 pounds for season four. Fun fact: he hated it.

For his scenes, Harbour lost a whopping 80 pounds in eight months by intermittent fasting and taking up Pilates.

However, it seems as though it wasn’t the best of experiences, admitting, “I don’t think I’ll ever do that again.”

The actor said he “gained it all back” for his upcoming film “Violent Night,” in which he plays Santa Claus.

Tags: Acting!, David Harbour, Stranger Things
SHARE
Our commenting rules: Don't be racist or bigoted, or post comments like "Who cares?", or have multiple accounts, or repost a comment that was deleted by a mod, or post NSFW pics/videos/GIFs, or go off topic when not in an Open Post, or post paparazzi/event/red carpet pics from photo agencies due to copyright infringement issues. Also, promoting adblockers, your website, or your forum is not allowed. Breaking a rule may result in your Disqus account getting permanently or temporarily banned. New commenters must go through a period of pre-moderation. And some posts may be pre-moderated so it could take a minute for your comment to appear if it's approved. If you have a question or an issue with comments, email: [email protected]
src="https://c.statcounter.com/922697/0/f674ac4a/1/"
alt="drupal analytics" >