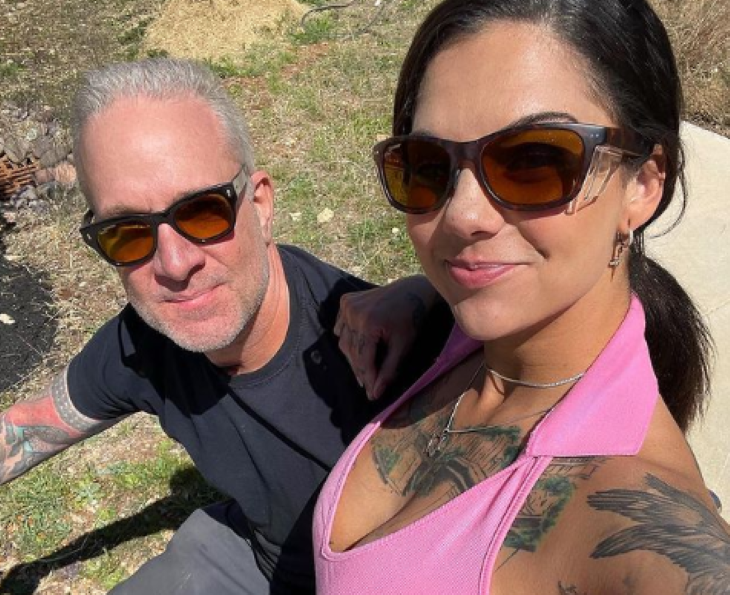 On Saturday, Jesse, 53, and Bonnie (real name: Alaina Hicks), 29, got married in a casual backyard celebration in Texas–of course, because that’s where all of the dark magic happens these days. via Page Six:

For the ceremony, the bride wore a white floor-length gown with a long train and sleeves made of lace. Her short veil cascaded down her long, dark locks, and she completed the look with white cowgirl boots…[she] held a bouquet of pink and white flowers as she made her way to the altar with one of the couple’s French bulldogs by her side.

The groom opted for a less traditional look, sporting dark gray slacks and a matching vest, which he wore over a white collared button-down and gold tie. He kept things casual by rolling up his sleeves and finishing off the outfit with a cream-colored fedora.

The couple — who got engaged in April — changed into more comfortable clothing for the reception, where they cut their two-tier cake using a cleaver made by the “glorified welder” himself.

And in the last video of Jesse’s Instagram carousel highlighting the day, Alex even gave the most basic bitch of toasts ever, but at least didn’t mention gay frogs or whatever shit he’s on a rant about at the moment. Also peep that Bible verse Jesse used as a caption. “That’s rich!” cackled every woman who’s ever come into contact with him.

I’m still stuck on Jesse sporting a fedora: the official hat of douchey wandering dick (at least if it’s him wearing it). This is Jesse’s fifth marriage, several of which–including his marriage to Sandra Bullock– reportedly ended due to his inability to keep his fuck parts to himself. He was also engaged to Kat Von D for a bit before allegedly raw-dogging 19 different women behind her back. This marks Bonnie’s second marriage; her first husband was musician, Dennis Desantis. So, the odds are in no one’s favor here, but let’s hope it lasts just so no other woman finds themselves tangled in Jesse’s infectious web. Texas has enough on their plate and I’m not sure there are enough antibiotics to go around.

Tags: Gross, Jesse James, Just Married, Kat Von D, Porn, Sandra Bullock, This Asshole, Vanilla Gorilla
SHARE
Our commenting rules: Don't be racist or bigoted, or post comments like "Who cares?", or have multiple accounts, or repost a comment that was deleted by a mod, or post NSFW pics/videos/GIFs, or go off topic when not in an Open Post, or post paparazzi/event/red carpet pics from photo agencies due to copyright infringement issues. Also, promoting adblockers, your website, or your forum is not allowed. Breaking a rule may result in your Disqus account getting permanently or temporarily banned. New commenters must go through a period of pre-moderation. And some posts may be pre-moderated so it could take a minute for your comment to appear if it's approved. If you have a question or an issue with comments, email: [email protected]
src="https://c.statcounter.com/922697/0/f674ac4a/1/"
alt="drupal analytics" >