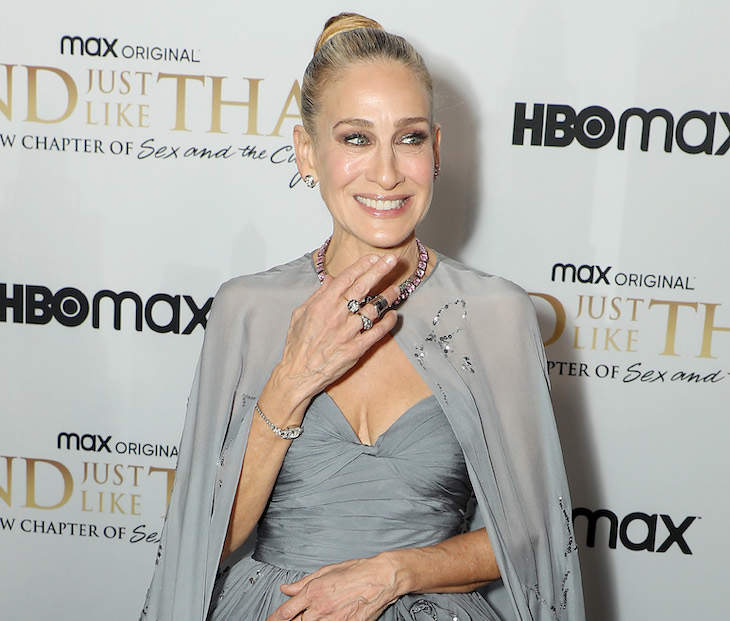 They say that time heals all wounds, but the clock that’s tracking Sarah Jessica Parker’s messy feud with Kim Cattrall must be operating in dog years or something, because these two continue to pack in as much drama as possible within the general concept of time. We’re nearing the fifth anniversary if the time Kim Cattrall called out SJP by name as one of the big reasons why she wasn’t ever going to show her face in a third Sex and the City movie. Since then, there have been ten lifetimes of sniping back and forth, each blaming the other for any on-set animosity that evolved into one of entertainment’s most enduring feuds. Sarah Jessica Parker is returning to that well once again to pump it drier than the desert jokes of SATC 2.

Last month, Kim kept the ball rolling by talking about how she certainly wanted nothing to do with the HBO revival, And Just Like That…, while simultaneously accusing the franchise of heading in a direction that was too tasteless for Kim. Sarah Jessica Parker clearly isn’t comfortable letting Kim get the final word here, so she talked about her messy, complicated relationship with her former co-star during an appearance with The Hollywood Reporter’s Awards Chatter podcast. SJP says it’s “very hard” to talk about the situation with Kim, but not that hard, apparently, because SJP said the following about Kim’s frequently noted opinions of SJP. via THR:

Parker acknowledged that “it’s very hard to talk about the situation with Kim,” but that she wanted “to kind of run through how it happened” to clarify why it is actually not the two-way “catfight” that the media has portrayed it to be. As she put it, “There has been one person talking.”

The “catfight” comment is a reference to SJP’s own comments from 2018, where she finally commented on the situation with Kim, by saying that there hasn’t been any kind of “catfight” between the two, whether that be on set, or after the shows and films wrapped production (despite Kim’s claims that she felt like she was in a “toxic relationship” with her former co-stars). And if SJP is hoping that the “one person” who has been doing the “talking” finally shuts up once and for all, well – she might have a better chance of seeing her husband retroactively win an Oscar for his work in Inspector Gadget. Because Kim has said that she has zero regrets about the stuff she’s said about Sarah Jessica Parker.

As for Kim’s little unsolicited review of And Just Like That... (you know, the one where she basically said it was shit stuck to the sole of a Manolo), or the times that Kim has called out Sarah Jessica personally, SJP thinks Kim was being rude for no damn reason but to be rude. via THR:

“There were just a lot of public conversations about how she felt about the show. I’ve spent a lot of years working really hard to always be decent to everybody on the set, to take care of people, to be responsible to and for people, both my employers and the people that I feel I’m responsible for as a producer of the show. And there just isn’t anyone else who’s ever talked about me this way.”

SJP also got into the fight that started all of this back in 2017. SJP says that everything was a-ok between the cosmo-sipping quartet, riiiiiight up until negotiations started on Sex and the City 3. At the time, it was reported by sources that Kim was acting like a diva and refusing to sign on for any number of reasons. According to SJP, she believes that Kim decided to bow out, simply because the studio wasn’t willing to play hardball with Samantha Jones. via THR:

In Parker’s view, the issues with Cattrall may date back to 2017, when a third Sex and the City movie was being contemplated but “fell apart” over contractual demands that Cattrall made of Warner Bros., the studio which was to finance and distribute the film. (Reports at the time suggested that Cattrall made her participation contingent upon the studio greenlighting an unrelated project of hers.) “They didn’t feel comfortable meeting where she wanted to meet, and so we didn’t do the movie because we didn’t want to do it without Kim,” Parker recounted. “Were we [she and costars Kristin Davis and Cynthia Nixon] disappointed? Sure. But it happens.”

I wish SJP indulged in a little pettiness and dropped some speculation on what side project Kim Cattrall really wanted Warner Bros. to greenlight. I personally want to believe it was a big-screen adaptation of Kim’s scatting video. If only because I’m deeply selfish and wish that clip of her attempting to scat alongside some rudimentary stand-up bass accompaniment was at least 120 minutes long.

Tags: And Just Like That, FEUDS!, Haters, Kim Cattrall, Sarah Jessica Parker, Sex And The City
SHARE
Our commenting rules: Don't be racist or bigoted, or post comments like "Who cares?", or have multiple accounts, or repost a comment that was deleted by a mod, or post NSFW pics/videos/GIFs, or go off topic when not in an Open Post, or post paparazzi/event/red carpet pics from photo agencies due to copyright infringement issues. Also, promoting adblockers, your website, or your forum is not allowed. Breaking a rule may result in your Disqus account getting permanently or temporarily banned. New commenters must go through a period of pre-moderation. And some posts may be pre-moderated so it could take a minute for your comment to appear if it's approved. If you have a question or an issue with comments, email: [email protected]
src="https://c.statcounter.com/922697/0/f674ac4a/1/"
alt="drupal analytics" >