I’ve never been to the Cannes Film Festival, but I imagine there’s a lot of preparation and planning involved if you want to attend, even if it’s just as an audience member. Because The Cannes Clap is no joke and I’m not talking about the one that will have you dipping out to the nearest pharmacie for some antibiotiques. I’m talking about the standing ovations, like the 12-minute palm-punisher Baz Luhrmann’s Elvis received after its screening on Tuesday. As everybody knows, you don’t go to a Cannes screening without having done everything in your power to build up the thickest, gnarliest callouses required to endure the gauntlet of The Cannes Clap. And it’s no walk in the park for those on the receiving end either.

As Uproxx reports, Tom Hanks couldn’t take the heat when the camera person tried to get the customary up-your-nose-with-a-rubber hose coverage of him basking in the glory, and redirected the camera over to novice professional Elvis impersonator Austin Butler. And Austin was so shook up he did that thing that football players do when they win the big game, close their eyes and point to the sky. Which I’ve never understood. It’s like, dude, what does that blimp have to do with any of this? Uproxx reports:

As mixed reviews for Baz Luhrman’s Elvis started to trickle in on Tuesday, the film apparently received a much more glowing reception at Cannes. According to Variety executive editor Ramin Setoodeh, the Austin Butler-starring biopic prompted a 12-minute long standing ovation, which Setoodeh described as “the biggest and most enthusiastic of the festival so far.”

Here’s Tom and Austin’s big moment. While Tom seems to have come unprepared, Austin is looking in fine form and has obviously been putting in the work. The possibility of being rewarded with The Cannes Clap is the only reason any of these celebrities do squats.

#Cannes2022 showers #ElvisMovie with a 12-minute standing ovation, the biggest and most enthusiastic of the festival so far. pic.twitter.com/GuiF0HLLQq

Page Six adds that 77-year-old Priscilla Presley, who was in attendance, has also been doing her squats, noting “as the cheers went on and on, a teary-eyed Austin Butler — who stepped into the blue suede shoes of the iconic crooner — hugged an equally-emotional Priscilla.” A 12-minute CC is quite an accomplishment until you remember that those clappers didn’t spend the previous 4-6 months slapping hard concrete surfaces and carrying commemorative tote bags filled with rocks to just sit there and give a little Nicole Kidman patty cake clap. They will stand for just about anything. Considering the reviews aren’t stellar, the Elvis envoy might want to consider that Lee Daniels’ The Paper Boy starring Zac Efron and aforementioned flop applauder Nicole has them beat by 3 minutes.

A reminder of the longest #Cannes standing ovations by minutes:

So no, I wouldn’t take the clap-happy Cannes crowd’s word for it. IndieWire called Elvis “utterly deranged,” “deliriously awful” and a “sadistically monotonous super-montage in which a weird Flemish guy manipulates some naïve young greaser over and over and over again until they both get sad and die.” And while Uproxx notes that Tom’s accent in the film is a recurring issue with critics, with The Hollywood Reporter calling it “arguably the least appealing performance of his career,” Austin’s performance has been “routinely cited as a highlight of the film,” despite the fact that Variety said he looks more like “John Travolta crossed with Jason Priestly” than Elvis. So I guess we’ll just have to wait and decide for ourselves on June 24 to decide if Elvis was worth Tom Hank’s introducing the novel coronavirus to the world.

On a final note, that brother in the header is model Alton Mason who plays Little Richard in the film. He’s been cut out of most of the pictures I’ve seen, but he made the trip and did his squats and deserves the recognition. See also: LITTLE RICHARD. Seriously, forget about Weird Al, where is our Little Richard biopic?

And here are some looks from Elvis‘ Cannes premiere: 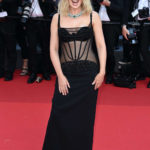 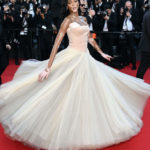 Tags: Austin Butler, Baz Luhrmann, Cannes Film Festival, Please Clap, Priscilla Presley, Tom Hanks
SHARE
Our commenting rules: Don't be racist or bigoted, or post comments like "Who cares?", or have multiple accounts, or repost a comment that was deleted by a mod, or post NSFW pics/videos/GIFs, or go off topic when not in an Open Post, or post paparazzi/event/red carpet pics from photo agencies due to copyright infringement issues. Also, promoting adblockers, your website, or your forum is not allowed. Breaking a rule may result in your Disqus account getting permanently or temporarily banned. New commenters must go through a period of pre-moderation. And some posts may be pre-moderated so it could take a minute for your comment to appear if it's approved. If you have a question or an issue with comments, email: [email protected]
src="https://c.statcounter.com/922697/0/f674ac4a/1/"
alt="drupal analytics" >