Tom Cruise Arrived On The Red Carpet For The Premiere Of “Top Gun: Maverick” In A Helicopter 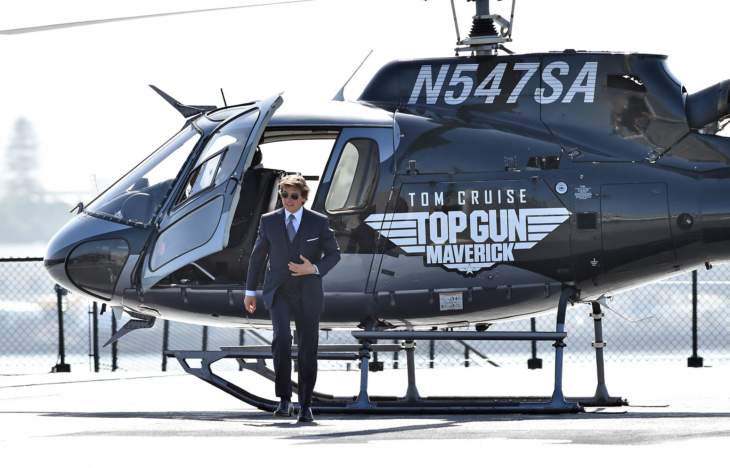 It took 36 years, but Tom Cruise has finally busted his Top Gun: Maverick nut all over the windshield of his F-14 Tomcat, which is probably why he had to fly onto the red carpet for yesterday’s premiere in a helicopter. Tom’s jizz is filled with thetens (that’s how he sheds them) which, if you’ve ever seen a mirror in a bathroom at a Scientology Center, you know are next to impossible to remove. So Tom’s Tomcat probably had to be decommissioned. According to The Hollywood Reporter, the four-hour-long red carpet extravaganza was held in San Diego aboard the USS Midway, a retired aircraft carrier. This means I can finally be honorably discharged, WITH DISTINCTION, for my tireless dedication to making up goof names for Top Gun 2: Secrets of The Bottom Drawer. And with that, I am out. May you have fair winds and following seas. I’ll take my 21-gun salute to go.

Tom was originally scheduled for a July 2019 takeoff, which means he’s been beating the drums of war for three long years in order to keep the public’s attention skyward. But now, we can finally give our tired necks a rest because the Eagle has landed. THR says Tom even flew the helicopter himself.

In typical Tom Cruise fashion, Top Gun: Maverick did not premiere with any old red carpet on Hollywood Boulevard. Instead, ahead of the film’s debut at Cannes in just a few short weeks, Paramount unveiled the action film on Wednesday with a San Diego takeover of retired aircraft carrier USS Midway — and a true action-star entrance.

While his castmates took a more grounded approach, Cruise, a licensed pilot, arrived via helicopter, landing on the edge of the vessel and strutting to the entrance of the red carpet to the cheers of fans, joking that an Uber entrance was just too simple. The over-the-top move kicked off a premiere spectacle, with jet flyovers, uniformed servicemen and a star-studded cast to the long-awaited sequel.

I’ve got to say, it’s a little disappointing. As clear as his ass is supposed to be, I’d expect him to have crashed the helicopter into the ocean, and just as the crowd had worked itself into a lather screaming “oh, the humanity!” while sobbing and falling to their knees, he’d pop up out of the ocean and swim to safety, hauling himself out of the water with one hand, a knife clenched in his teeth, the other hand clutching the severed head of a Great White shark. Now that kind of entrance might get me to believe that Shelly Miscavage really is just on an extended tropical vacation of her own accord. Here’s Tom working the literal runway.

Tom Cruise just arrived to the #TopGunMaverick premiere in a helicopter he flew himself pic.twitter.com/uA4X0UL4DZ

Tom wasn’t the only TG2 star on hand. The rest of the cast including Miles Teller (Rooster, son of Goose), land-lubber Jennifer Connelly, Jon Hamm (Cyclone), Glen Powell (Hangman, those two should switch), Lewis Pullman (just plain old Bob), Jay Ellis (Payback, and he’s probably a bitch), Monica Barbaro (Phoenix, come on, ladies are hard to write for) Danny Ramirez (Fanboy) and Greg Tarzan Davis (Coyote not so ugly). Ed Harris as Rear Admiral, teehee, and, as promised, Val Kilmer as Iceman are also in the cast but weren’t at yesterday’s premiere. But Tom talked about Val:

“Tom said, ‘I’m not making the movie without Val,’ and of course we had to talk to Val; he was up to it, he helped create the scene with us,” recalled Bruckheimer of the actor, who lost his speaking voice after a battle with throat cancer. “It was a very emotional day — you saw Maverick and Iceman back on screen again after 36 years.”

Lady Gaga was not on hand to sing Hold My Hand, but Rachel McAdams was there, even though she’s not in the movie. Here are Glen and Miles contractually blowing smoke up Tom’s ass. “Literally.”

"This guy is the coolest dude in the world" – #TopGunMaverick star @glenpowell shares the craziest thing he ever saw Tom Cruise do pic.twitter.com/2J3dyeSTGf

Miles Teller describes Tom Cruise as an "ally" and a "cheerleader" at the #TopGunMaverick premiere pic.twitter.com/31VqBgGdrx

Tom has been working these boys hard, so I know they must be tired. And not just at this red carpet, which lasted over 4 hours before they were allowed to go to the screening.

Ellis says Cruise’s program often including swimming for two or three hours, followed by two hours of flying: “We were all terrified, but I think there was a point we all looked at each other and said, ‘We got this. We might actually be able to figure this out.’”

And to show off those physical results, the film features a beach football scene that mirrors the iconic beach volleyball moment from the original film. “We probably all had four or five layers of different types of oils on us to really make sure the muscles popped,” Ellis joked. “Nobody could stand next to a flame or it might get dangerous, but we had a great time.”

I mean, that beach volleyball scene was really the only culturally significant contribution Top Gun ever gave to the world. Tom easily could have skipped all the flight training and dialog and just given us what we want. All we can do is hope that Tom has put as much of his exacting attention to detail on each and every oiled-up undulating abdominal, trap, and glute, as gives to his stunts. Please forgive my palaver, this is a bittersweet moment for me. Here are some shots from the premiere. Top Gun: Maverick opens in theaters on May 27. Semper Fortis to the following:

Top Gun 2: The Ego Has Landed

Top Gun 2: Those Tiny Wrinkles You See Were Caused By G-Force, OK?

Tags: Ed Harris, Jennifer Connelly, Jon Hamm, Miles Teller, Rachel McAdams, sequels, Tom Cruise, Top Gun, Val Kilmer, Where Is Shelly?
SHARE
Our commenting rules: Don't be racist or bigoted, or post comments like "Who cares?", or have multiple accounts, or repost a comment that was deleted by a mod, or post NSFW pics/videos/GIFs, or go off topic when not in an Open Post, or post paparazzi/event/red carpet pics from photo agencies due to copyright infringement issues. Also, promoting adblockers, your website, or your forum is not allowed. Breaking a rule may result in your Disqus account getting permanently or temporarily banned. New commenters must go through a period of pre-moderation. And some posts may be pre-moderated so it could take a minute for your comment to appear if it's approved. If you have a question or an issue with comments, email: [email protected]
src="https://c.statcounter.com/922697/0/f674ac4a/1/"
alt="drupal analytics" >