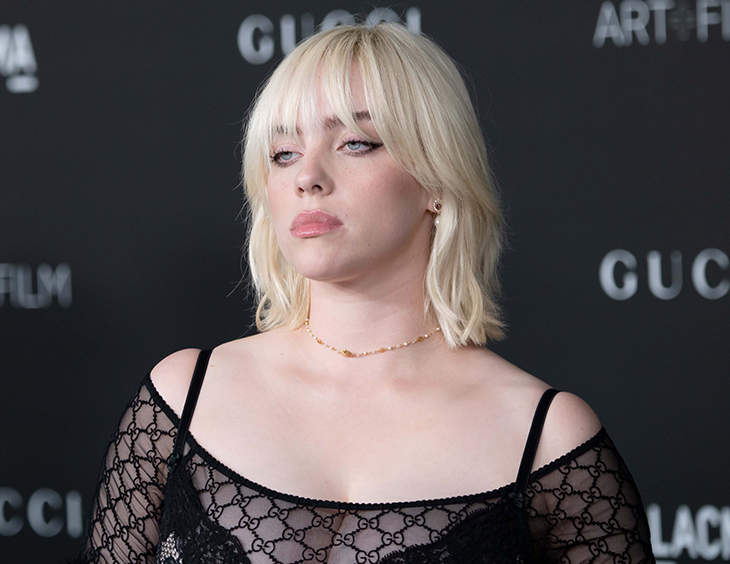 Looks like Billie Eilish is really trying to piss Kanye West off by looking after her fans’ wellbeing because TMZ has footage of Billie once again interrupting a show to make sure that the audience was okay. Although, she did not then offer the audience a glass of water and some snacks, so something for her to improve on for next time. We know the last time she did this, Kanye took it as a dig at Travis Scott who notoriously continued performing as audience members passed out and died at his Astroworld festival back in November. Ultimately 10 people died including a nine-year-old and Travis and many of the people involved in the concert have been named in billions of dollars worth of lawsuits.

Earlier this month, Billie stopped a show in Atlanta after an audience member had trouble breathing. And not because they caught COVID from going to a concert in a pandemic, they had asthma or something. Billie paused things to get the audience member an inhaler, and said, “I wait for people to be OK until I keep going.” Kanye thought that was Billie’s way of shading Travis and threatened to quit this year’s Coachella, which he and Billie are headlining, if she didn’t apologize. Cut to Kim Kardashian going: “What can I say that Kanye decides to finally quit me too?” Billie responded by saying that she was not dissing Travis and was just trying to make sure her fan was okay. Well, we’ll just have to wait to see if he considers this recent action another slight and if Kanye pulls out of Coachella in the end (he won’t).

Complex says that Billie performed at New York City’s Madison Square Garden over the weekend and between songs she encouraged the audience to “take a breath” saying:

“If you want to sit down, you are allowed. Go ahead, sit down, take a breath. And everybody down here, can you step back? Give everybody some room down here. …Are we happy? Are we feeling good?”

Billie then picked up a Yeezy shoe and lit it on fire, watching it burn as she cackled maniacally. No, she didn’t do any of that; she then got into her song Male Fantasy.

Clearly, Billie isn’t one to take chances and knows that if she wants to stay a famous rich person she better come correct. She won’t be the next artist getting sued for concert madness because she knows how to keep a crowd calm and collected. Also, most of her songs are hella slow, so… that helps too.

Tags: Astroworld, Billie Eilish, Kanye vs EVERYONE, Kanye West, Travis Scott
SHARE
Our commenting rules: Don't be racist or bigoted, or post comments like "Who cares?", or have multiple accounts, or repost a comment that was deleted by a mod, or post NSFW pics/videos/GIFs, or go off topic when not in an Open Post, or post paparazzi/event/red carpet pics from photo agencies due to copyright infringement issues. Also, promoting adblockers, your website, or your forum is not allowed. Breaking a rule may result in your Disqus account getting permanently or temporarily banned. New commenters must go through a period of pre-moderation. And some posts may be pre-moderated so it could take a minute for your comment to appear if it's approved. If you have a question or an issue with comments, email: [email protected]
src="https://c.statcounter.com/922697/0/f674ac4a/1/"
alt="drupal analytics" >