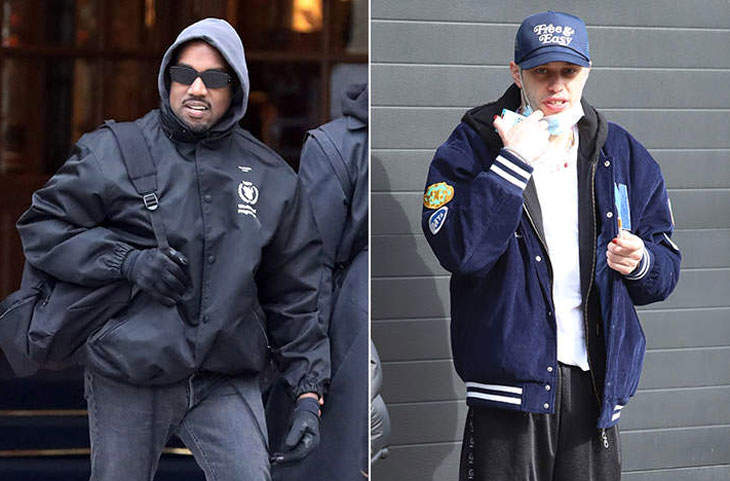 Kanye West is once again going after his nemesis Pete Davidson, and he’s now leveled up the fighting between them (which is very one-sided and coming only from Kanye). Previously, Kanye threatened to beat Pete’s ass in a song and has reportedly dissed Pete’s style as “mall clothes” (says someone who does a line for The Gap). Well, now Kanye is moving on to even more unhinged behavior and DJ Akademiks says that it’s “a fact” that Kanye is going around trying to start a rumor that “Pete Davidson has AIDS.” However low YOU can go, Kanye proves time and time again that he can go lower.

Kim is busy dating Pete and doubling the value of her SKIMS brand, which according to Bloomberg is now valued at $3.2 billion after her sales surged 90% last year. So she’s not paying much attention to Kanye’s hysterics surrounding spending two hours at a 4-year-old’s birthday party or parading his new piece, Julia Fox, all over the place. Which must really stick in Kanye’s craw, as he’s now allegedly making some bold claims.

The Source says this started after DJ Akademiks was on Twitch saying that he knows for “a fact” that Kanye is pushing a stigma:

“He’s going crazy with himself,” said Akademiks. “A n***a told me, this is real talk, Kanye has been telling anyone within an earshot of himself, he’s trying to spread a rumor that Pete Davidson has AIDS. I’m telling you this is a fact. I’ve heard this from eight people. He’s telling everybody!” Continuing his gossip run, Ak said, “I’m telling you, this is a fact. Bruh, if you gotta spread a rumor that the n***a f*ckin’ your wife got AIDS, you burnt out, bro, wrap it up. It’s over.”

Here’s part of the Twitch stream:

Akademiks claims that Kanye is going around telling people that Pete Davidson has HIV 🤔 pic.twitter.com/8kLOwHzGDZ

TMZ seems to co-sign this as sources tell them Pete has heard what Kanye is saying:

We’re told Kanye’s claim has made for a few awkward phone calls between Pete and mutual friends he has with Kanye–who are confused and disturbed by the childish behavior.

Our sources say Kanye’s brutal diss track, where he raps, “God saved me from the crash, just so I can beat Pete Davidson’s ass” … diss didn’t come as much of a surprise to friends of either man, as he’s been known to take shots in song.

But, those close to Pete are disturbed by the fact Kanye would allegedly use such a serious health issue to try and lash out at Pete.

But TMZ’s Kanye sources deny the claims and say that it’s “nonsense.”

If DJ Akademiks is telling the truth, then Kanye needs to watch himself. Because blogger Tasha K just lost $4 million to Cardi B for suggesting Cardi has herpes, so Pete can sue the fuck out of Kanye and take Kanye from Christian Genius Billionaire to Christian Moron Not-Much-Of-A-Billionaire-Anymore.

Tags: Christian Genius Billionaire Kanye West, Kanye West, Kim Kardashian, Pete Davidson, Trash
SHARE
Our commenting rules: Don't be racist or bigoted, or post comments like "Who cares?", or have multiple accounts, or repost a comment that was deleted by a mod, or post NSFW pics/videos/GIFs, or go off topic when not in an Open Post, or post paparazzi/event/red carpet pics from photo agencies due to copyright infringement issues. Also, promoting adblockers, your website, or your forum is not allowed. Breaking a rule may result in your Disqus account getting permanently or temporarily banned. New commenters must go through a period of pre-moderation. And some posts may be pre-moderated so it could take a minute for your comment to appear if it's approved. If you have a question or an issue with comments, email: [email protected]
src="https://c.statcounter.com/922697/0/f674ac4a/1/"
alt="drupal analytics" >