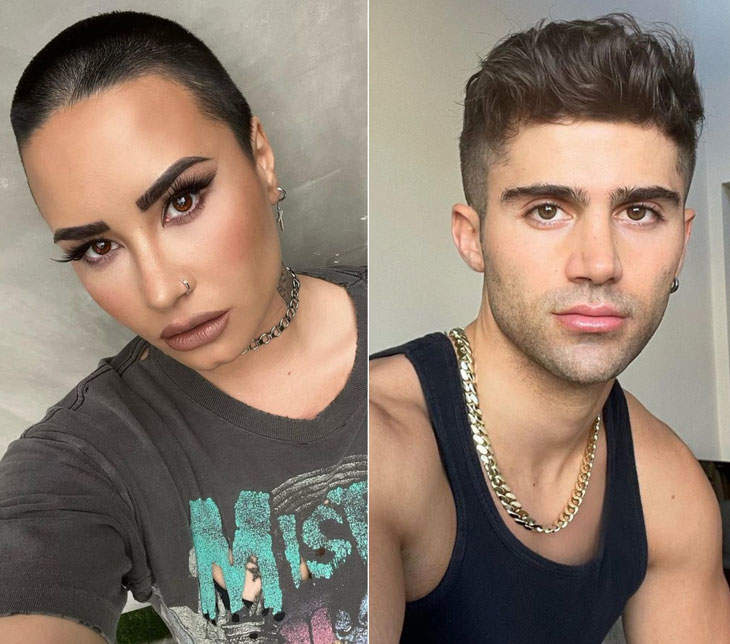 Max, of course, has to do his part for this symbiotic exchange of celebrity tomfoolery to be completed, and so he posted a thirst trap to Instagram on Wednesday with the caption: “I never have complaints.”

Back in November 2020, Demi brought up their failed engagement to Max at the People’s Choice Awards and Max let Demi know to stop talking about him. This is what E! News wrote at the time:

In a series of Instagram comments, the 29-year-old actor shared how he really felt after the 28-year-old singer joked about their engagement and subsequent breakup at the 2020 E! People’s Choice Awards. He brought it up to his ex publicly after Lovato posted a picture of themself rocking a chic pink suit and dramatic new ‘do on Friday, Nov. 20. While many followers praised the two-time Grammy nominee’s haircut in the comments, Ehrich had other things on his mind.

“Exploiting our breakup for clout at PCA is not chill,” he wrote in the comments section. He also told the artist to “stop talking about me on award shows. Thanks.”

Demi has a full-blown scary-ass spider tattoo on the side of their head and they have the audacity to accuse someone else of scaring away orgasms? Charlotte’s Web isn’t going to make someone bust either, Demi!

Tags: Demi Lovato, Max Ehrich
SHARE
Our commenting rules: Don't be racist or bigoted, or post comments like "Who cares?", or have multiple accounts, or repost a comment that was deleted by a mod, or post NSFW pics/videos/GIFs, or go off topic when not in an Open Post, or post paparazzi/event/red carpet pics from photo agencies due to copyright infringement issues. Also, promoting adblockers, your website, or your forum is not allowed. Breaking a rule may result in your Disqus account getting permanently or temporarily banned. New commenters must go through a period of pre-moderation. And some posts may be pre-moderated so it could take a minute for your comment to appear if it's approved. If you have a question or an issue with comments, email: [email protected]
src="https://c.statcounter.com/922697/0/f674ac4a/1/"
alt="drupal analytics" >