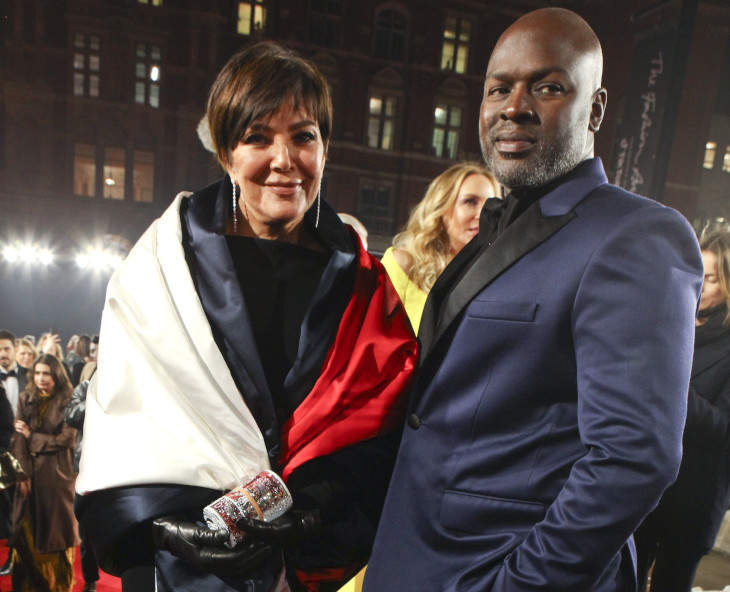 Insouciant inseminator Tristan Thompson did what he needed to do by publicly apologizing to Khloe’ Kardashian for putting his baby batter in the wrong oven, giving their 3-year-old daughter True a sibling that lives in another state. According to Page Six, he even softened the blow for True with a peace offering by surprising her with a gift every 3-year-old wants, 100 roses, mere hours before posting his Instagram apology. So the ball’s in Khloe’s court, so to speak. E! News reports that a white flag from the Kardashian-Jenner Klan may have gone up as Kris Jenner’s boyfriend Cory Gamble was seen flashing a Tristan Thompson jersey at paparazzi after the Sacramento Kings’ game against the Los Angeles Lakers on Tuesday night.

In the past, the Kardashian move has been to scapegoat the offending third party, as Khloe’ did to Jordyn Woods, but that’s going to be tricky this time. Obviously, it is not a great look to go ballistic on a baby, even Kris knows this. And since Tristan’s a man and the baby’s mom, Maralee Nichols, has the power of Maury at her fingertips, it seems the Kardashians are out of options. The only way to save face now is to say The Lord’s Prayer and ask that he forgive their trespasses as they forgive those who trespass against them. Hard to believe that that all-time banger of prayer is attributed to Scott Disick, but it is not for us to question, only to believe. So in a tentative first step towards reconciliation between Tristan and the Klan, Corey was probably sent to signal an acceptance of things they cannot change. And yes, Scott wrote the Serenity prayer too. What won’t he do! E! reports:

On Tuesday, Jan. 4, the 41-year-old talent manager publicly showed his support for the NBA star, attending the Sacramento Kings’ match-up against the Los Angeles Lakers at the Crypto.com Arena in L.A.

Although the Kings lost to the Lakers 114-122, Corey—who is currently dating Kris Jenner—continued to root for Tristan following the game. In video footage obtained by E! News, he was seen holding up the NBA star’s No. 13 jersey to the paparazzi as he made his way to his car.

The sighting came just days after Tristan, 30, revealed that a paternity test had determined that he indeed fathered a baby boy with Maralee Nichols, a woman who is suing him for pregnancy and child-related expenses.

I just know the executives at Hulu better have the Kardashian’s florist on speed dial because this plotline is going to be solid gold once it airs. Kris especially deserves an entire wall of red and white roses that spell out her catchphrase, “you’re doing amazing, Sweetie!” as a thank you for the drama. Corey’s jersey flash was meticulously planned. He brought it in a sealed plastic bag like it contains important DNA evidence.

I’m like, dude, Tristan’s DNA is not that precious. There’s probably plenty of it just floating around the air in every city he’s played in. Page Six intimates that Corey’s show of support was in opposition to the Klan’s wishes, saying “his moves might land him in the doghouse with Kris” but that is just plain silly. Still, the Klan is going to have to move forward somehow since you simply cannot unmake an infant. Maralee shared a picture of her and Tristan’s new arrival on Christmas day.

And on Christmas eve, Khloe’ shared a picture of her new arrival, a revenge face and body that just won’t quit.

I mean technically Khloe’ could quit, but sadly I just don’t think she knows how or when.

Tags: Corey Gamble, Khloe Kardashian, Kris Jenner, Maralee Nichols, Plot Twist!, Tristan Thompson
SHARE
Our commenting rules: Don't be racist or bigoted, or post comments like "Who cares?", or have multiple accounts, or repost a comment that was deleted by a mod, or post NSFW pics/videos/GIFs, or go off topic when not in an Open Post, or post paparazzi/event/red carpet pics from photo agencies due to copyright infringement issues. Also, promoting adblockers, your website, or your forum is not allowed. Breaking a rule may result in your Disqus account getting permanently or temporarily banned. New commenters must go through a period of pre-moderation. And some posts may be pre-moderated so it could take a minute for your comment to appear if it's approved. If you have a question or an issue with comments, email: [email protected]
src="https://c.statcounter.com/922697/0/f674ac4a/1/"
alt="drupal analytics" >