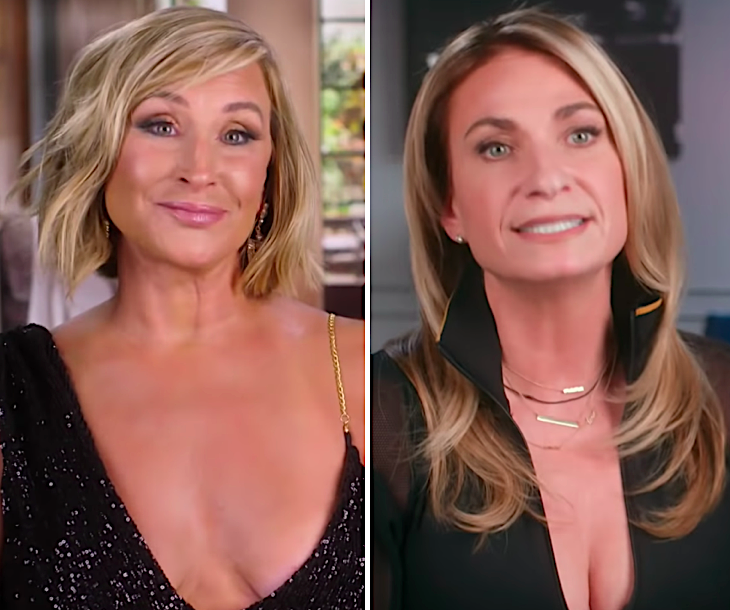 This week Stephen King, Joan Didion, and Zadie Smith all hung up their typewriters and said, “Fuck it!” Cuz they knew the release of Dave Quinn’s instant literary classic Not All Diamonds and Rosé: The Inside Story of the Real Housewives from the People Who Lived It meant their careers were OVAH. This stunning new book features tell-all interviews with Andy Cohen, Bravo insiders, and many of the Real Housewives. Including former Real Housewives of New York City cast member, Heather Thomson, who claims she’d seen co-star Sonja Morgan so wasted that “she was letting guys put lit cigarettes in her vagina.” UM…

Heather brought up this insane, actually pretty disturbing anecdote when recalling the cast’s Season 7 trip to Atlantic City in 2015. Things got off to a bad start when Heather and Kristen Taekman arrived at Sonja’s townhouse to meet the limo that would drive them to New Jersey. Except the limo hadn’t arrived yet, and Sonja wouldn’t let the ladies in her house to wait for it, even though it was a rainy winter morning. This infuriated Heather, who says, via Page Six:

“That’s actually when I turned on Sonja, because I had literally carried that woman home,” Thomson alleged to Quinn. “I had scraped her off carpets. I had taken her out of a vestibule where she was letting guys put lit cigarettes in her vagina.”

She continued, “I had done so much for that woman. And here we are, waiting to go to Atlantic City. We all arrived at her house, but the limo wasn’t there yet. And it was raining out. Well, she would not let us in.”

Oh shit. Heather doesn’t explicitly say that Sonja was drunk when the cigarette incident allegedly occurred, but knowing Sonja, she was probably blackout. Lady has a reputation for binge drinking while filming, then “drying out” in between seasons. A lot of Housewives think Sonja has a drinking problem, and it’s an endlessly revisited storyline. HOWEVER, if men were indeed putting lit cigarettes into Sonja’s vagina, then that’s not on her, that’s on those disgusting men. When you’re that drunk, it’s not like you can give consent to “let” somebody do that to you. It’s extremely gross and sad all around, and Heather didn’t need to make it public.

Sonja didn’t respond to Heather’s cigarette allegations in the book, but she did defend herself about making the ladies wait outside. She told the author that while she was upstairs getting ready for the trip her sister called to tell her someone had died, and she’d be unable to take care of Sonja’s daughter, Quincy Morgan (say what you will about Sonja, she never made her daughter go on camera). Sonja explains she didn’t wanna leave her daughter alone and she hadn’t agreed to film in her townhouse that day. She thinks that Heather was playing up her rage for the cameras.

for Leah to post this on her IG making fun of an assault in response to Sonja calling her an opportunist is absolutely disgusting and unacceptable @BravoTV @Andy need to stop rewarding this abhorrent behaviour and fire her pic.twitter.com/lQvmIs7xZt

Here’s Sonja wasted on that same trip to Atlantic City. This was the episode where she bragged about having partied with “John-John Kennedy and Madonna”:

We’ll never know about John-John, but Madge, can you confirm??

Tags: Real Housewives Of New York City, Real Housewives Shit, What In The Hell Kind Of GD Book Is This?
SHARE
Our commenting rules: Don't be racist or bigoted, or post comments like "Who cares?", or have multiple accounts, or repost a comment that was deleted by a mod, or post NSFW pics/videos/GIFs, or go off topic when not in an Open Post, or post paparazzi/event/red carpet pics from photo agencies due to copyright infringement issues. Also, promoting adblockers, your website, or your forum is not allowed. Breaking a rule may result in your Disqus account getting permanently or temporarily banned. New commenters must go through a period of pre-moderation. And some posts may be pre-moderated so it could take a minute for your comment to appear if it's approved. If you have a question or an issue with comments, email: [email protected]
src="https://c.statcounter.com/922697/0/f674ac4a/1/"
alt="drupal analytics" >