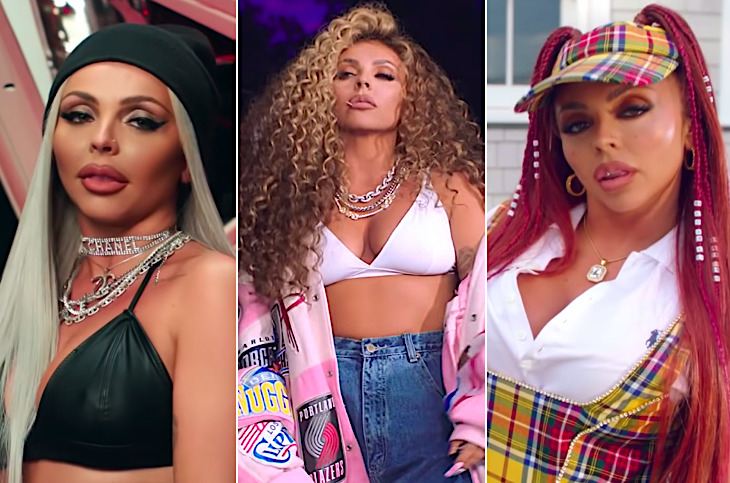 In the Vulture article, the interviewer points out that “there’s been a notable shift” in the way Jesy’s been marketed since becoming a solo “R&B-first pop star.” They brought up an August interview with The Guardian, in which Jesy was asked about the blackfishing accusations and she responded by saying that she was upset by the allegations and wouldn’t wanna offend anyone, but she “wasn’t aware that’s how people felt”. Vulture asked, “On reflection, do you understand the points being made?” Here’s Jesy’s answer:

“The whole time I was in Little Mix I never got any of that. And then I came out of [the band] and people all of a sudden were saying it. I wasn’t on social media around that time, so I let my team [deal with it], because that was when I’d just left. But I mean, like, I love Black culture. I love Black music. That’s all I know; it’s what I grew up on. I’m very aware that I’m a white British woman; I’ve never said that I wasn’t.”

Then the interviewer asked if she was deleting comments that accused her of blackfishing on Instagram. Jesy said, “I don’t know about that. Maybe it was my team.” Following the interview, Jesy’s publicist confirmed that her management had indeed deleted comments and blocked users. In a post-interview email, Jesy claimed her team was doing that to protect her from her mental health (she’s been vocal about how online bullying has affected her).

Here’s the video that brought even more blackfishing and “blaccent” accusations Jesy’s way:

FYI, 2021 isn’t the first time Jesy’s been accused of blackfishing. She got shit in 2018 for wearing dreads in a now-deleted Instagram pic:

Why does Nicki always work with problematic artists? Like that girl is WHITE pic.twitter.com/j9FZgdbSiy

Don’t worry, Jesy. You may have lost some girlfriends, but Amelia Hamlin, Rita Ora, Iggy Azalea, Bhad Bhabie, and the Kardashians are more than happy to welcome you into Blackfishing Club. Remember: the first rule of Blackfishing Club is play so, so dumb. And for most of these gals, that’s not exactly a challenge.

Tags: Blackfish, Jesy Nelson, Little Mix, Nicki Minaj
SHARE
Our commenting rules: Don't be racist or bigoted, or post comments like "Who cares?", or have multiple accounts, or repost a comment that was deleted by a mod, or post NSFW pics/videos/GIFs, or go off topic when not in an Open Post, or post paparazzi/event/red carpet pics from photo agencies due to copyright infringement issues. Also, promoting adblockers, your website, or your forum is not allowed. Breaking a rule may result in your Disqus account getting permanently or temporarily banned. New commenters must go through a period of pre-moderation. And some posts may be pre-moderated so it could take a minute for your comment to appear if it's approved. If you have a question or an issue with comments, email: [email protected]
src="https://c.statcounter.com/922697/0/f674ac4a/1/"
alt="drupal analytics" >