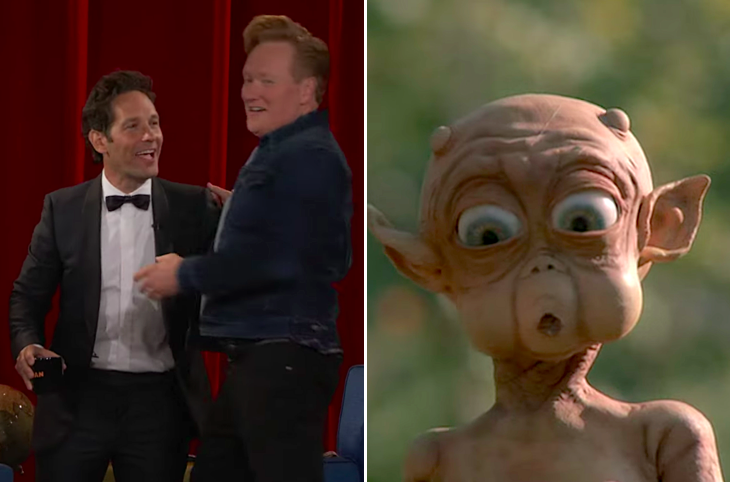 Back in 2004 Paul Rudd went on Conan O’Brien’s late-night show and claimed to have brought a top-secret clip of the upcoming Friends finale. But when the clip was played, it was actually a scene from the critically panned 1988 E.T. knockoff, Mac and Me, in which a boy in a wheelchair rolls off a cliff, falls into a lake, and is spotted by the titular alien.

So began a running bit in which Paul Rudd comes onto Conan’s shows, says he has a promotional clip of his latest project, promises Conan that this time it’s not the clip from Mac and Me, and then plays the clip from Mac and Me. Comedy gold. Well, last night Paul made a surprise appearance on Conan, which airs its final episode on Thursday, and played the prank one final time. Actually, two final times. Cuz a joke isn’t funny unless it’s driven into the ground over and over and over.

In his (presumably) final Conan appearance, Paul Rudd pops in during an interview with Bill Hader. First Paul claims to have a clip from an SNL sketch that never made it beyond the dress rehearsal because it was so terrible. Then he plays, wait for it… Mac and Me. After the clip Paul explains why he began showing this scene on Conan’s show:

I just remember the very first time thinking it’s so artificial to sell your wares and show your clip from your movie. Why don’t I show a clip from another movie? We’ve never talked about this, really, but I thought, why don’t I show this clip from a movie that I saw a long time ago that is really strange… and there’s one scene in particular.

Then Paul tells Bill and Conan that initially he was torn between the Mac and Me clip and a similarly ridiculous one from Baby Geniuses, in which a super-baby beats up a bunch of adults. Paul asks Conan if he can show the other clip, and Conan says yes. I bet you can guess which clip Paul shows instead. Conan follows this up by hugging Paul and telling him, “you’re a horrible man.”

If you’re interested, Newsweek has compiled all the Mac and Me pranks from over 17 years. And if you’re extra-interested, here’s that terrible Baby Geniuses clip Paul was thinking about showing:

The Internet is a beautiful place.

Tags: Conan, Conan O'Brien, Goodbyes, Open Post, Paul Rudd
SHARE
Our commenting rules: Don't be racist or bigoted, or post comments like "Who cares?", or have multiple accounts, or repost a comment that was deleted by a mod, or post NSFW pics/videos/GIFs, or go off topic when not in an Open Post, or post paparazzi/event/red carpet pics from photo agencies due to copyright infringement issues. Also, promoting adblockers, your website, or your forum is not allowed. Breaking a rule may result in your Disqus account getting permanently or temporarily banned. New commenters must go through a period of pre-moderation. And some posts may be pre-moderated so it could take a minute for your comment to appear if it's approved. If you have a question or an issue with comments, email: [email protected]
src="https://c.statcounter.com/922697/0/f674ac4a/1/"
alt="drupal analytics" >