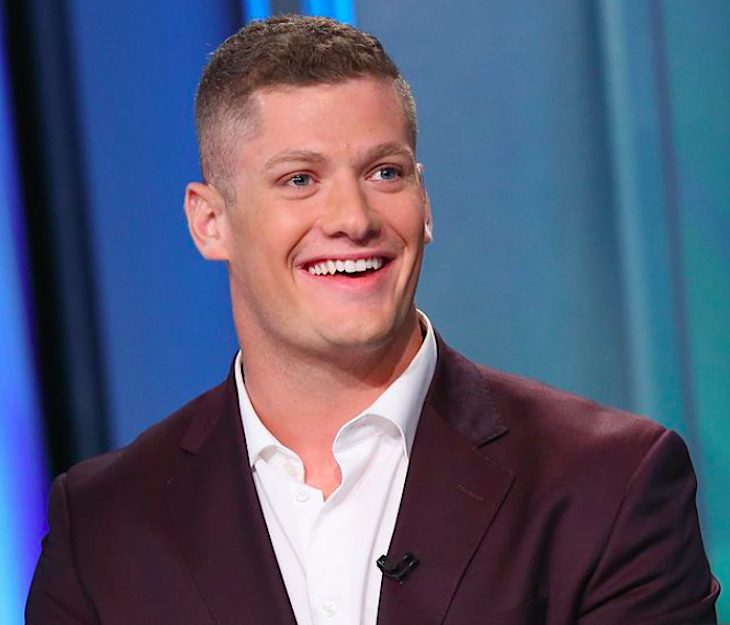 Yesterday Carl Nassib made sports history when he came out as gay. The 28-year-old Las Vegas Raiders defensive end is officially the first active NFL player to be openly gay. Carl, who describes himself as “a pretty private person,” shared the news in an Instagram video and written statement. He wrote that he’s thankful for the support he’s received from family, friends, the NFL, his coaches, and fellow players and that he’s always been “greeted with the utmost respect and acceptance.” Carl also announced he is partnering with the nonprofit organization The Trevor Project to help prevent LGBTQ+ suicide and has begun by donating $100,000. So far the public response to Carl’s coming out has been overwhelmingly supportive, which has surely confused all the homophobic jocks from my high school.

Here’s exactly what Carl said in his video:

What’s up people, I’m Carl Nassib. I’m at my house here in Westchester, Pennsylvania. I just want to take a quick moment to say that I’m gay.

I’ve been meaning to do this for a while now, but I finally feel comfortable enough to get it off my chest. I really have the best life, I got the best family, friends, and job a guy could ask for. I’m a pretty private person, so I hope you guys know that I’m really not doing this for attention. I just think that representation and visibility are so important.

I actually hope that like, one day, videos like this and the whole coming out process are just not necessary. But until then I’m gonna do my best and do my part to cultivate a culture that’s accepting, that’s compassionate, and I’m gonna start by donating $100,000 to The Trevor Project.

They’re an incredible organization, they’re the #1 suicide prevention service for LGBTQ youth in America. And they’re truly doing incredible things. And I’m very excited to be a part of it, help in any way that I can and I’m really pumped to see what the future holds. That’s all I have for you guys. Hope you have a great day. Work hard.

The video is followed by a written statement, in which Carl wishes everyone a happy Pride month, thanks the people in his life for their support, mentions the Trevor Project and the elevated suicide stats in LGBTQ youth, and asks the media to give him some space as he navigates this “exciting time” in his life.

His team, the Las Vegas Raiders, immediately tweeted that they were proud of Carl:

Proud of you, Carl 🖤 pic.twitter.com/R9aJxYFefW

The official NFL Twitter account also tweeted their support and shared a statement from Commissioner Roger Goodell, which says that “the NFL family is proud of Carl” and representation matters. And Jon Gruden, Carl’s coach on the Las Vegas Raiders, told the Las Vegas Review-Journal that he supports Carl as he enters his second season with the team, and: “I learned a long time ago what makes a man different is what makes him great.”

Obviously, Carl isn’t the first gay player in the NFL, but those who have come out have done so after their playing careers. In 2014 Michael Sam became the first openly gay player to be drafted into the NFL, but he only played in the preseason. So Carl is the first football guy to play in a regular-season game.

While there are negative comments on Carl’s Instagram post (lots of religious homophobes and sports fans telling Carl to keep his sexuality private and to not corrupt their children [LOL]), most of the responses are positive. Billie Jean King, Bobby Berk, Gus Kenworthy, Billy Eichner, Dwyane Wade, and a bunch of athletes I don’t know all commented with messages of support.

And then there are the other type of comments. The queer horndogs, who have shown up to Carl’s Instagram page in droves to plaster peach, eggplant, drool, and fire emojis on pictures like these:

I mean… Jesus Christ. I’m not even into jocks, but this guy DOES IT for me. Congratulations Carl! Another barrier broken!

Tags: Carl Nassib, Gay, NFL, Sports
SHARE
Our commenting rules: Don't be racist or bigoted, or post comments like "Who cares?", or have multiple accounts, or repost a comment that was deleted by a mod, or post NSFW pics/videos/GIFs, or go off topic when not in an Open Post, or post paparazzi/event/red carpet pics from photo agencies due to copyright infringement issues. Also, promoting adblockers, your website, or your forum is not allowed. Breaking a rule may result in your Disqus account getting permanently or temporarily banned. New commenters must go through a period of pre-moderation. And some posts may be pre-moderated so it could take a minute for your comment to appear if it's approved. If you have a question or an issue with comments, email: [email protected]
src="https://c.statcounter.com/922697/0/f674ac4a/1/"
alt="drupal analytics" >