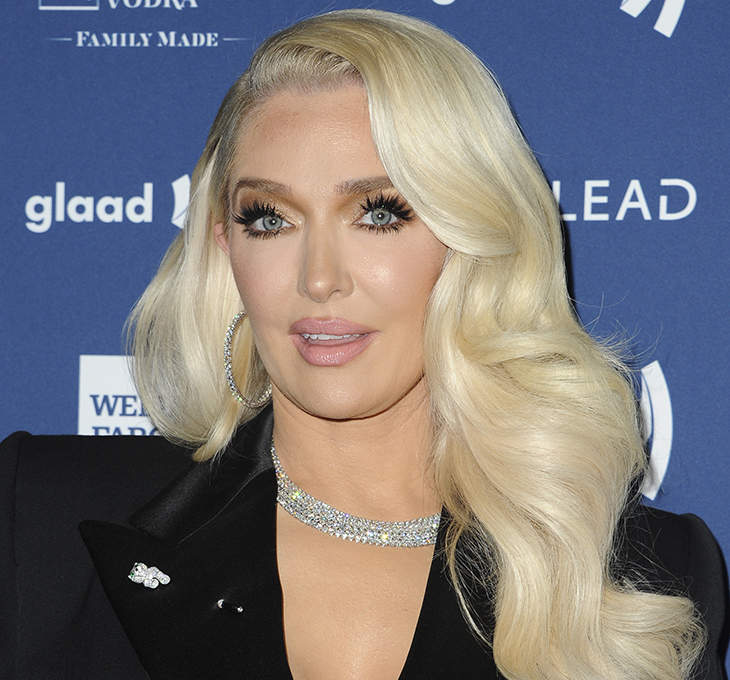 On Monday the documentary about Real Housewives Of Beverly Hills‘ Erika Jayne and Tom Giradi‘s legal drama was released on Hulu. Coincidentally on Monday, Erika was also dropped by her lawyers. Page Six says that Erika’s legal team let the court know they would no longer be representing her and she was on her own. To quote Erika’s own track How Many Fucks, I say: “How many lawyers does she have? How many lawyers does she have? None! Not one! Zero, zero, zero, DONE!”

Erika’s legal problems started when Tom was accused of being a huge scammer who stole money from, clients and partners of his law firm. Erika filed for divorce from Tom and was also accused of taking part in his schemes. It’s been alleged that their divorce is a scam to help hide assets Erika may have known to be stolen. Well, now she’s gonna have to find another lawyer who will help her out because sweetie has been shit-canned:

While it is unclear what exactly went wrong, the lawyers said in their court documents that “the relationship of trust and confidence that is essential to a properly functioning attorney-client relationship has broken down and, in the good faith assessment of counsel, the relationship is irreparable.”

Dinsmore & Shohl LLP also said its team told Jayne to seek a new lawyer and warned her of “the potential consequences of not timely securing replacement counsel.” It is unclear if she has since retained new attorneys.

So this may have to do with the documentary’s release because there were some interesting factoids given out that sort of implicates Erika. Like the fact she was listed as a secretary of one of Tom’s LLCs and that money had been transferred to her company, EJ Global from it.

It’s also important to note that while Erika has been sued and accused of using the divorce to hide embezzled funds, she hasn’t been formally charged. She’s included in the bankruptcy case because of her marriage to Tom:

Law360 features reporter Brandon Lowrey explained in the documentary, “[Tom and Erika are] together in these bankruptcy proceedings. A lot of these debts that they owe in bankruptcy proceedings, [they] owe together, possibly. It’s going to be hard for her to say she didn’t know that anything was going on.”

While Erika’s people did not respond to comment, she’s always asserted that she didn’t know what Tom was up to in regards to the shady financial stuff.

Erika probably doesn’t care about losing a lawyer. Erika did star in Chicago on Broadway and had some scenes with lawyer Billy Flynn, so she has enough legal experience to represent herself. But if times get so tough that she can’t afford her “glam squad” anymore and has to install her own polyester weave, the sound of her cries will deafen the Greater Los Angeles area.

Tags: Erika Jayne, Real Housewives Of Beverly Hills, Tom Girardi
SHARE
Our commenting rules: Don't be racist or bigoted, or post comments like "Who cares?", or have multiple accounts, or repost a comment that was deleted by a mod, or post NSFW pics/videos/GIFs, or go off topic when not in an Open Post, or post paparazzi/event/red carpet pics from photo agencies due to copyright infringement issues. Also, promoting adblockers, your website, or your forum is not allowed. Breaking a rule may result in your Disqus account getting permanently or temporarily banned. New commenters must go through a period of pre-moderation. And some posts may be pre-moderated so it could take a minute for your comment to appear if it's approved. If you have a question or an issue with comments, email: [email protected]
src="https://c.statcounter.com/922697/0/f674ac4a/1/"
alt="drupal analytics" >