Danny Masterson Will Stand Trial For 3 Counts Of Rape 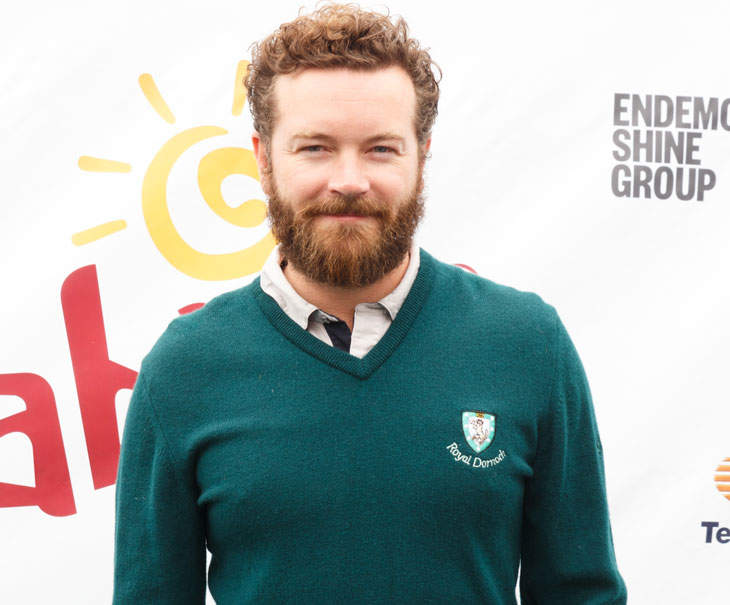 If your arm muscles are feeling a little extra swole today, then I’m guessing that you printed out that smug-dripping selfie of Danny Masterson and his wife of 9 years Bijou Phillips putting on gross smiles before his rape trial and slapped it on a punching bag before going at it. Because that selfie belongs in the Punchable Hall of Fame. But honestly, I’d much rather see the face that Danny made when he found out that his rape case is going to trial and wondered how Little Lord David Miscavige is going to get him out of this one.

Last June, 45-year-old Danny Masterson was charged with allegedly raping three women in three separate incidents, which date from 2001 and 2003. This past January, Danny pled not guilty to all charges and vowed to fight the accusations until the end. This week, a three-day preliminary hearing was held to determine if the case is going to trial. Los Angeles County Superior Court Judge Charlaine F. Olmedo heard from both sides. Three women, all former Scientologists, bravely testified about how Danny allegedly raped them.

We already heard the brain and soul-deflating details from one of his accusers, and on Wednesday, another accuser, who was in a relationship with him for five years, told the court about how she woke up one day in 2001 to him raping her. The woman told him to stop, but he did not, so she pulled the ginger mop on his head because he has a thing about people touching his hair and face. If our hair holds our secrets, then Danny’s mop is probably filled with dark-sided unholiness and he didn’t want that getting out. via People:

“I tried pushing him off me and saying no I don’t want to have sex with you,” the woman reportedly said. “He wouldn’t stop. So I did something that I knew would make him angry and likely to get off me. I pulled his hair. He has these rules, ‘no touch hair rule,’ ‘no touch face rule.’ He had this thing about his hair, so I knew if I pulled it really, really hard, he would get off me. But what he did was he hit me.”

The woman went on to testify that Danny punched her and called her “white trash.” She claims that Danny raped her again, and after that, she went to the ethics officials at the Church of Scientology (HA! at Scientology having “ethics officials”) and told them what happened. At that point, she had been a Scientologist for 5 years. This next part will make you turn inside/out from the shock of it all. The ethics officials allegedly told her she was lying and was not sexually assaulted. It took her 15 years to work up the courage to report the rape to the police.

As he did with the other accusers, Danny’s lawyer, Thomas Mesereau, attacked the woman’s credibility and said that her story changed from when she first spoke to police and prosecutors. Thomas Mesereau also accused the women of being money grubbers because they filed a civil lawsuit against Danny, Scientology, and David Miscavige. But prosecutors defended the women, saying that they only filed the lawsuit to try to keep Scientology from harassing them into shutting their mouths. One woman has already accused Scientology of some mob shit by trying to intimidate her into silence by murdering her two dogs.

The Associated Press reports that after the three days of testimony, Judge Olmedo ruled that there’s probable cause for a trial and added that she found the testimony from the women “credible for the purposes of the preliminary hearing, where the bar for sufficient evidence is significantly lower than it will be at the forthcoming trial.” Danny, who had a mask covering half of his smarmy ass mug, didn’t have much reaction to the news that he’s going to trial:

The actor had no visible reaction to the judge’s decision as he sat in court, with a small group of family and friends behind him. Masterson’s lead attorney Thomas Mesereau, who also defended Michael Jackson and Bill Cosby in their sexual misconduct cases, declined to comment outside court.

During the hearing, Mesereau suggested that police, prosecutors and witnesses were tainted by anti-religious bias against the Church of Scientology. Masterson is a prominent Scientologist, all three women are former Scientologists.

Scientology played such a big part in the preliminary trial that Judge Olmedo had to remind everyone that Scientology was not a defendant. It’s expected to play an even bigger part in the trial since many of the witnesses will be current or former members of Scientology.

Danny must return to court on June 7 for a new arrangement. A start date for Danny’s trial will be announced later. If he’s found guilty of all charges, he could be thrown into the clink for up to 45 years. I know, only 45 years. Instead of 45 years, he should be launched off of the planet. Actually, scratch that, he’s a Scientologist, traveling into space is his dream goal. Just throw him into a locked room with Leah Remini holding a pair of hair clippers. That’ll be a start.

Tags: Bijou Phillips, Danny Masterson, David Miscavige, Please Report To The Devil's Office, Scientology, Trash
SHARE
Our commenting rules: Don't be racist or bigoted, or post comments like "Who cares?", or have multiple accounts, or repost a comment that was deleted by a mod, or post NSFW pics/videos/GIFs, or go off topic when not in an Open Post, or post paparazzi/event/red carpet pics from photo agencies due to copyright infringement issues. Also, promoting adblockers, your website, or your forum is not allowed. Breaking a rule may result in your Disqus account getting permanently or temporarily banned. New commenters must go through a period of pre-moderation. And some posts may be pre-moderated so it could take a minute for your comment to appear if it's approved. If you have a question or an issue with comments, email: [email protected]
src="https://c.statcounter.com/922697/0/f674ac4a/1/"
alt="drupal analytics" >