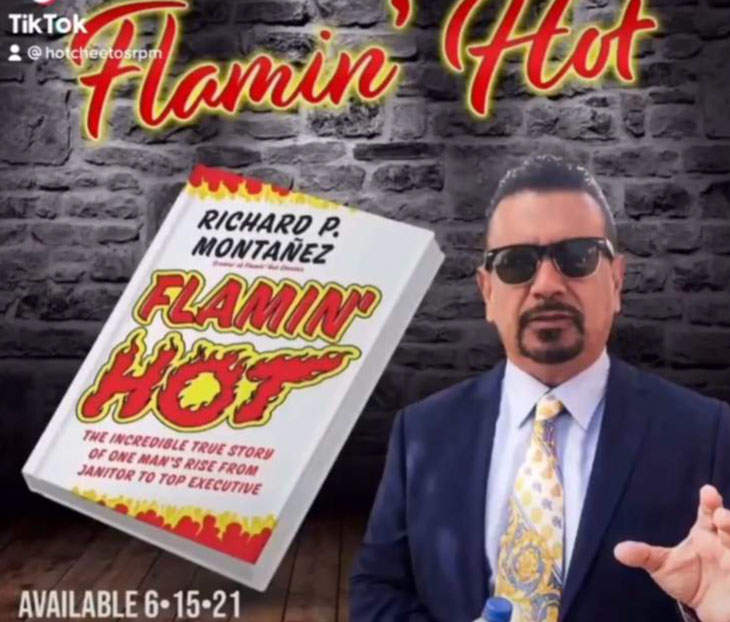 Turns out, the origin story of the Flamin’ Hot Cheeto we were taught as children was a lie. Then again, so was the origin story of America so this saga is actually a truer characterization of our nation than anything being taught in schools. Eater reports on a Los Angeles Times expose which discredits Richard Montañez’s claims that he invented the Flamin’ Hot flavor while working as a janitor in the Frito-Lay plant like some Good Will Dusting Cheeto savant. Richard has parlayed his rags-to-riches story into a career as a motivational speaker, author, and muse to Eva Longoria who is producing and directing his story for the big screen. While Richard maintains he invented the flavor in his own kitchen, Frito-Lay says that they were actually already testing Flaimin’ Hots when Richard pitched his concoction. It’s time for us as Americans to dig deep and ponder — What will you tell your grandchildren about the Flamin’ Hot Wars of 2021?

Richard’s version of events begins with a mishap on the Frito-Lay factory floor where he was working as a janitor. This sounds like an amazing origin story for a superhero, but in this case, the Cheetos are the ones who gained radioactive superpowers. According to The Hill:

The idea for Flamin’ Hot Cheetos came to him when, one day, a machine broke in the assembly line and a batch of Cheetos didn’t get dusted with their standard orange cheese powder. Montañez took the plain Cheetos home and experimented with putting chili powder on them, an idea inspired by a street vendor in his neighborhood, who made Mexican grilled corn with lime and chili.

His friends and family liked the taste, so he decided to pitch the product to the CEO. After all, the CEO at the time, Roger Enrico, had sent out a video “telling all employees he wanted them to take ownership of the company,” Montañez writes. He decided to do just that: “I called him up, not knowing you weren’t supposed to call the CEO.”

Richard claims that the CEO gave him 2 weeks to prepare a presentation so he “headed straight to the library to check out books on marketing, designed a unique bag to package his product and walked into the meeting wearing a $3 tie.” Richard says he knocked those executives right out of their socks and, voila, the Flamin’ Hot was born and Guy Fieri finally had a political foe worthy of challenging him for the title of Mayor of Flavortown. Only, that’s not what actually happened. Eater reports:

According to the LA Times, though, the story is mostly a lie. In a massive report published over the weekend, the Times meticulously rips apart the story, showing how Flamin’ Hot snacks were already on the market by the time Montañez pitched his snack ideas, how Montañez has changed his story over the years, and how those involved with the Flamin’ Hot line’s development are baffled as to how Montañez claimed it was his idea. “We have interviewed multiple personnel who were involved in the test market, and all of them indicate that Richard was not involved in any capacity in the test market,” said Frito-Lay in a statement.

In fact, the Flamin’ Hot line was the brainchild of a few people within Frito-Lay. There was Fred Lindsay, a salesman in the Chicago region who saw spicy snacks taking off and wanted Frito-Lay to compete. There was Sharon Owens, a product manager who took up spicy snack development. And then there was Lynne Greenfield, who came up with the flavor, the name, and the original packaging ideas. The snacks hit test markets in 1990, two years before Montañez says he pitched his products in 1992. “It is disappointing that 20 years later, someone who played no role in this project would begin to claim our experience as his own and then personally profit from it,” said Greenfield.

Lynne is the person who prompted Frito-Lay to investigate Richard’s claims when she heard his story in 2018. Guy is really going to have some stiff competition when Flavortown holds its next election. Sounds to me like Richard might be a bit of an exaggerator, and Frito-Lay probably let him run with a hit for a long time because it’s a feel-good story with a human face rather than a CGI story with Chester Cheeto’s creepy lack of genitalia. Richard defended his claims to Variety saying:

Richard also posted this on Instagram (but has recently deleted “photographs of what he claims are original design materials for Flamin’ Hot Cheetos.“)

As for Eva’s movie, Eater says that the producers were told the results of Frito-Lay’s investigation back in 2019 but they decided to move forward with the movie anyway. Earlier this month, Eva posted this casting news.

This won’t be a true American story until someone gets sued. And the would-be mayors of Flavortown, Guy, Richard, Lynne, and Flavor Flav, battle it out in The Flavordome for gustatory dominance.

Tags: Eva Longoria, Flamin' Hot Stuff, Flavortown Business
SHARE
Our commenting rules: Don't be racist or bigoted, or post comments like "Who cares?", or have multiple accounts, or repost a comment that was deleted by a mod, or post NSFW pics/videos/GIFs, or go off topic when not in an Open Post, or post paparazzi/event/red carpet pics from photo agencies due to copyright infringement issues. Also, promoting adblockers, your website, or your forum is not allowed. Breaking a rule may result in your Disqus account getting permanently or temporarily banned. New commenters must go through a period of pre-moderation. And some posts may be pre-moderated so it could take a minute for your comment to appear if it's approved. If you have a question or an issue with comments, email: [email protected]
src="https://c.statcounter.com/922697/0/f674ac4a/1/"
alt="drupal analytics" >