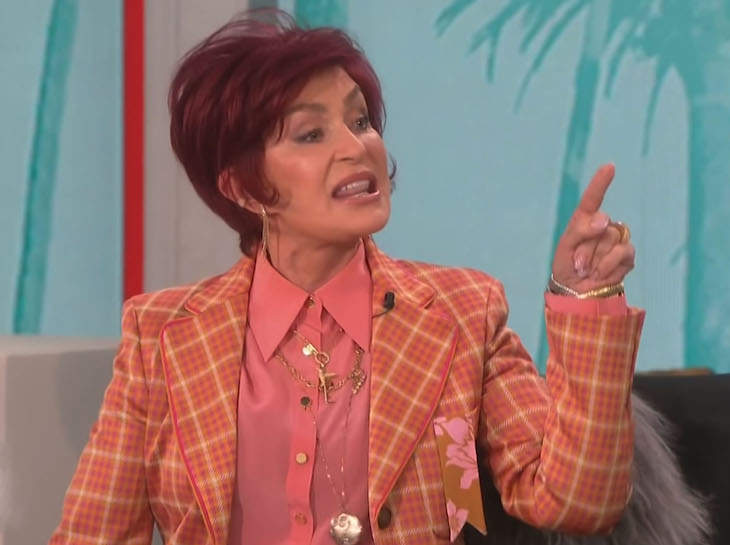 It was only a matter of time before someone jumped to the defense of permanently annoying Piers Morgan, in the wake of his hateful comments directed towards Meghan Markle. Piers got in trouble with ITV and 41,000 of their viewers after he called Meghan a liar when she told Oprah Winfrey that the British media campaign against her got so bad, she didn’t want to be alive anymore. Piers’ friend Sharon Osbourne quickly tweeted support for him after he “quit,” and yesterday she really defended him on The Talk and it really got messy.

Because everyone is talking about Prince Harry and Meghan’s interview, and the subsequent fallouts and various ripple effects their revelations have had, it was covered on yesterday’s episode of The Talk. Although for a moment in yesterday’s episode, it could have been temporarily been re-named The One-Sided Shout, because Sharon didn’t really seem to want to do much talking. Sharon argued that Piers isn’t racist and that the comments he made were simply just Piers exercising his right to freedom of speech, and also he’s a friend, and so does that make HER racist too? via Entertainment Tonight:

Osbourne told viewers and co-hosts Sheryl Underwood, Amanda Kloots and Elaine Welteroth that she was merely supporting her “friend” and “his freedom of speech and his opinions on what he felt about the interview of Meghan and Harry.”

Remember last summer when white people promised on Instagram to stop, listen, and learn about how racism is more than just hate speech? I guess Sharon was busy that day. Sheryl tried to explain to Sharon that when Piers was previously a guest on The Talk, she tried to talk to Piers about how his hate for Meghan has “racial implications.” Sheryl tried to explain that once again – that calling Meghan a liar and hating on her for speaking out – has racial implications:

“He doesn’t want to understand how Meghan was treated was racism and then says…I don’t see it as being racist – I don’t believe what she’s going through – it’s that white entitlement, privilege that makes it racist upon itself,” Underwood continued. “So if you’re saying I stand with you, how do you address people who say then you are standing with racism? I’m not saying that you are.”

Sharon remained both The Queen of Still Not Getting It and a visual example of pretty much what Sheryl was trying to say, by demanding Sheryl give an example of a time Piers was racist while at the same time threatening her not to cry while she flipped through her mental Rolodex of evidence.

I absolutely commend Sheryl Underwood & Elaine Welteroth for holding their composure listening to Sharon Osborne gaslight racism on #TheTalk. She made this about her when it has NOTHING to do w/ her feelings. Plus she was rude & continued to dismiss them trying to educate her 😤 pic.twitter.com/5aVlCXllSQ

Not long after Sharon’s comments started picking up steam online, did someone bring up the fact that Sharon’s energy seems to be something we’ve seen before:

Later in the day, Sharon seemed to address the situation on Instagram by acting cute and pretending she didn’t know why people were so upset with her.

As ET points out, someone in the comments volunteered to do the work for her, by explaining that, “It wasn’t about BLACK women scolding you, as they were trying to get you to understand from the prospective of a black person.” Sharon replied: “I actually really appreciate and respect this comment. Your approach allows a lot of room to listen.” Oh so now she wants to listen?

Sheryl’s career started in the world of stand-up comedy. I think if Sheryl hadn’t been in the position of dodging so much verbal shrapnel from Sharon, she might have been in the right headspace to shut Sharon up with a devastating comeback. “Picking on a Black woman for speaking up about racism? Sharon, if you want to co-host a show with Piers so badly, just say so!“

Tags: Meghan Markle, Piers Morgan, Sharon Osbourne, Sheryl Underwood, The Talk
SHARE
Our commenting rules: Don't be racist or bigoted, or post comments like "Who cares?", or have multiple accounts, or repost a comment that was deleted by a mod, or post NSFW pics/videos/GIFs, or go off topic when not in an Open Post, or post paparazzi/event/red carpet pics from photo agencies due to copyright infringement issues. Also, promoting adblockers, your website, or your forum is not allowed. Breaking a rule may result in your Disqus account getting permanently or temporarily banned. New commenters must go through a period of pre-moderation. And some posts may be pre-moderated so it could take a minute for your comment to appear if it's approved. If you have a question or an issue with comments, email: [email protected]
src="https://c.statcounter.com/922697/0/f674ac4a/1/"
alt="drupal analytics" >