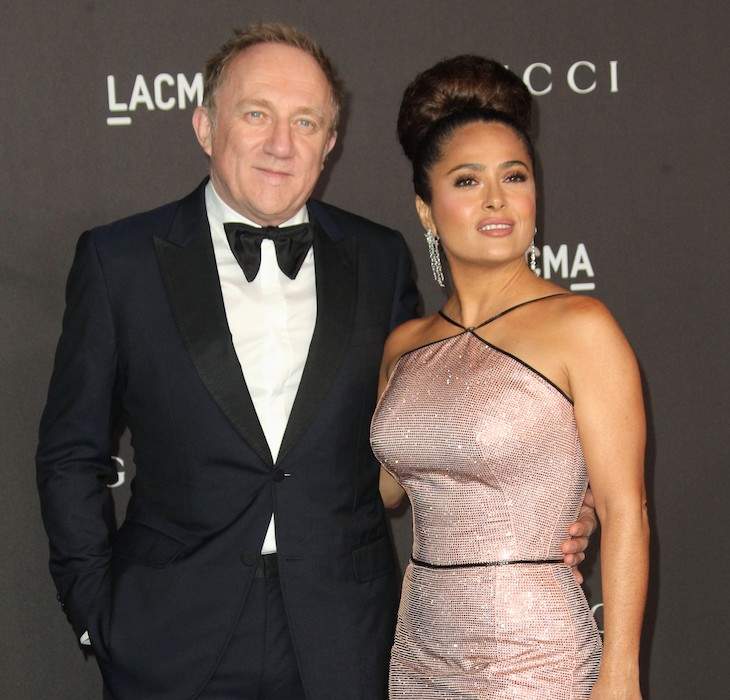 Salma Hayek is married to François-Henri Pinault, a French billionaire who made his money by being born to a French billionaire (he runs his father’s company Kering, which owns luxury brands like Gucci, Yves Saint Lauren, and Balenciaga). Other fun facts about François-Henri: he has four kids with three different women, one of whom is “I don’t get out of bed for less than $46,000 a month in child support” Linda Evangelista. Salma and her very rich husband have been married since 2009, and, during an appearance on Dax Shepard’s podcast, Armchair Expert, she claims she doesn’t give a rip when people say she’s only with him for his $43.4. billion. Her motto is, “Yeah, whatever, bitch. Think what you want.”

The topic came up when Dax mentioned he was a fan of François-Henri, describing him as a “fucking nice, fun, generous, nice warm guy” who was also “super sexy”, via TooFab:

“I’m gonna be honest, I didn’t know who he was, I just heard or maybe read in a headline that you had married a really rich guy. Maybe that’s why she married him.”

“I meet him and I’m like, this guy is so foxy. Oh my God, the confidence, his eyes, he’s so good-looking and charming and I was like, oh, this motherf—er could’ve been broke,” he added. “He’s a bombshell.”

Hey, if you’re gonna suck up, suck up to a billionaire. Salma obviously agreed with Dax, saying:

“You know the thing is that in pictures you cannot begin to guess the magic in him. He’s made me become a much better person, and grow in such a good, healthy way,” Hayek said of her other half. “And, you know, when I married him, everybody said, ‘Oh, it’s arranged marriage, she married him for the money.’ I’m like, ‘Yeah, whatever, bitch. Think what you want.’ 15 years together, and we are strong in love. And I don’t even get offended, I’m like, yeah, whatever.”

Salma then explained that she believes there’s discrimination against rich men and that not all of them are bad, materialistic, or people undeserving of their wealth. Now, this is the discrimination we should be discussing in 2021! Those poor billionaire men.

Salma adds that even she, a proud defender of the ultra-rich, initially presumed François-Henri would be a controlling workaholic. But once she spent time with him, he melted all her preconceptions away. When Dax noted that society likes to overgeneralize relationships, Salma agreed, saying, “Putting things into boxes – I don’t like that, I’m a rebel.” Oh yes. Putting things into boxes. Very, very bad. Unless it’s the £200,000 engagement ring François-Henri bought her. In which case that’s very, very good.

Tags: Being Rich Is Hard, Billionaire Shit, Salma Hayek
SHARE
Our commenting rules: Don't be racist or bigoted, or post comments like "Who cares?", or have multiple accounts, or repost a comment that was deleted by a mod, or post NSFW pics/videos/GIFs, or go off topic when not in an Open Post, or post paparazzi/event/red carpet pics from photo agencies due to copyright infringement issues. Also, promoting adblockers, your website, or your forum is not allowed. Breaking a rule may result in your Disqus account getting permanently or temporarily banned. New commenters must go through a period of pre-moderation. And some posts may be pre-moderated so it could take a minute for your comment to appear if it's approved. If you have a question or an issue with comments, email: [email protected]
src="https://c.statcounter.com/922697/0/f674ac4a/1/"
alt="drupal analytics" >